With the advent of the atomic era in 1945, the U.S. Army sought the best ways to organize its forces on what could potentially be a nuclear battlefield. As the 1950s progressed it became apparent that the Army’s ground forces would need to spread out on the battlefield to avoid excessive casualties, but at the same time, those units needed to maintain, or increase, the amount of firepower in the same area. Thus, requirements for maneuverable and flexible major tactical organizations demanded highly mobile divisions with greatly increased firepower. For this purpose the regiment was deemed too large and unwieldy and had to be broken up into smaller organizations which would become known as “battle groups.”

When the Army’s infantry divisions were reorganized under what became known as the “Pentomic” structure in 1957, the traditional regimental organization was eliminated, raising questions as to what the new units were to be called, how they were to be numbered, and what their relationship to former organizations was to be.

On 24 January 1957 the Secretary of the Army approved the Combat Arms Regimental System (CARS) concept which was designed to provide a flexible regimental structure that would permit perpetuation of each regiment’s history and tradition in the new tactical organization of divisions, without restricting the organizational trends of the future. Under CARS, the regimental headquarters and its headquarters company (HHC) were placed under the direct control of the Department of the Army.

The three battalion HHCs and the four existing special troops companies (Tank, Heavy Mortar, Service and Medical) were disbanded. The rifle companies were then made available to be reorganized and redesignated as the headquarters of a battle group, or could be activated as a separate company if needed. The illustration below provides an idea of how CARS affected the 16th Infantry Regiment. 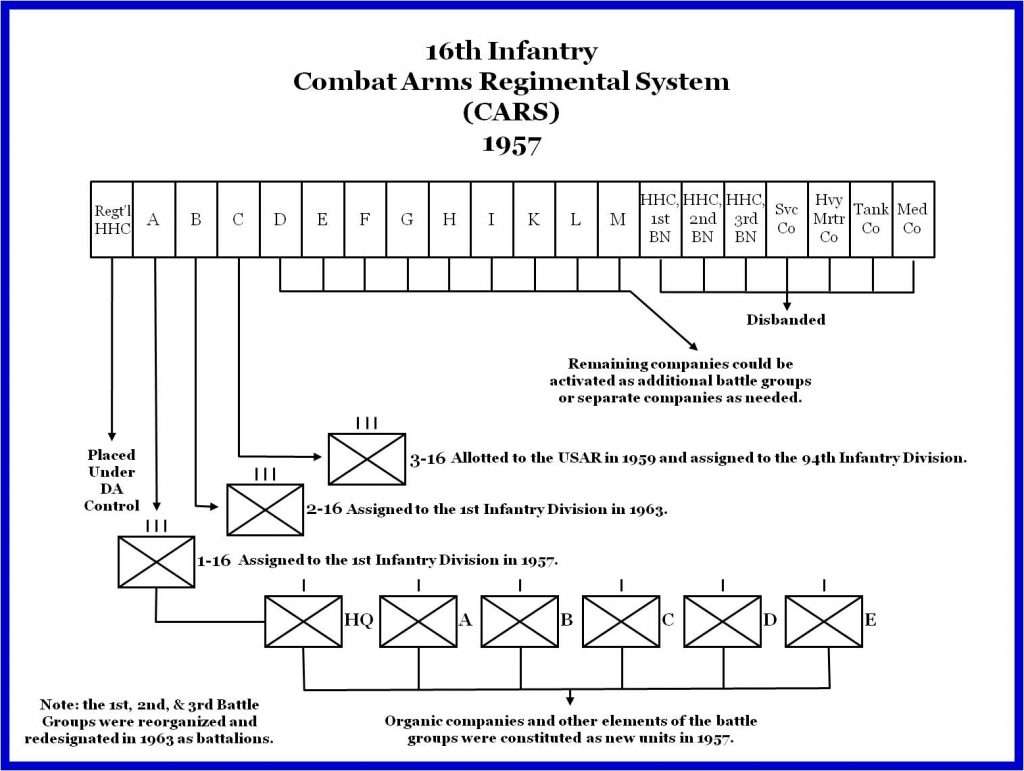