In 1963, the U.S. Army abandoned the unwieldy Pentomic organization for a structure that in many mays harkened back to the old triangular division. This was the “H-Series” Table of Organization and Equipment (TOE) that was the end result of the Reorganization Objective Army Division (ROAD) study in the early 1960s. This organization brought back the brigade HHC as a command structure. Three brigades were added to the division and each brigade was to consist, typically, of three maneuver battalions. In appearance, the brigade looked much like the old infantry regiment, however, there were no specialty companies added to the structure such as the service and heavy mortar companies of old. Also, the battalions, at least in wartime, were not intended to be assigned to a given brigade. They were assigned directly to the division and only attached to the brigade so that they could be easily swapped around as needed for various missions and maximum flexibility.

The infantry battalions consisted of a large headquarters company and three rifle companies. The headquarters company consisted of six specialty platoons and a communications section. The rifle companies consisted of three rifle platoons and a weapons platoon. In 1963, all three existing battalions of the 16th Infantry were reorganized using this basic TOE. The 1st and 2nd Battalions would deploy to Vietnam and fight in this configuration for the first two years. During the fighting there in 1965 through 1967, Army leaders realized that the infantry battalions in theater would benefit greatly from an addtional rifle company due to the nature of the mission. Many battalions organized such a company provisionally using their scout, 81mm mortar, and anti-tank platoons and were using them as a reserve force or for headquarters security and similar missions. The Army finally authorized the addition of a fourth rifle company for units serving in Vietnam and on 1 August 1967, the 1st and 2nd Battalions each formed a D Company. 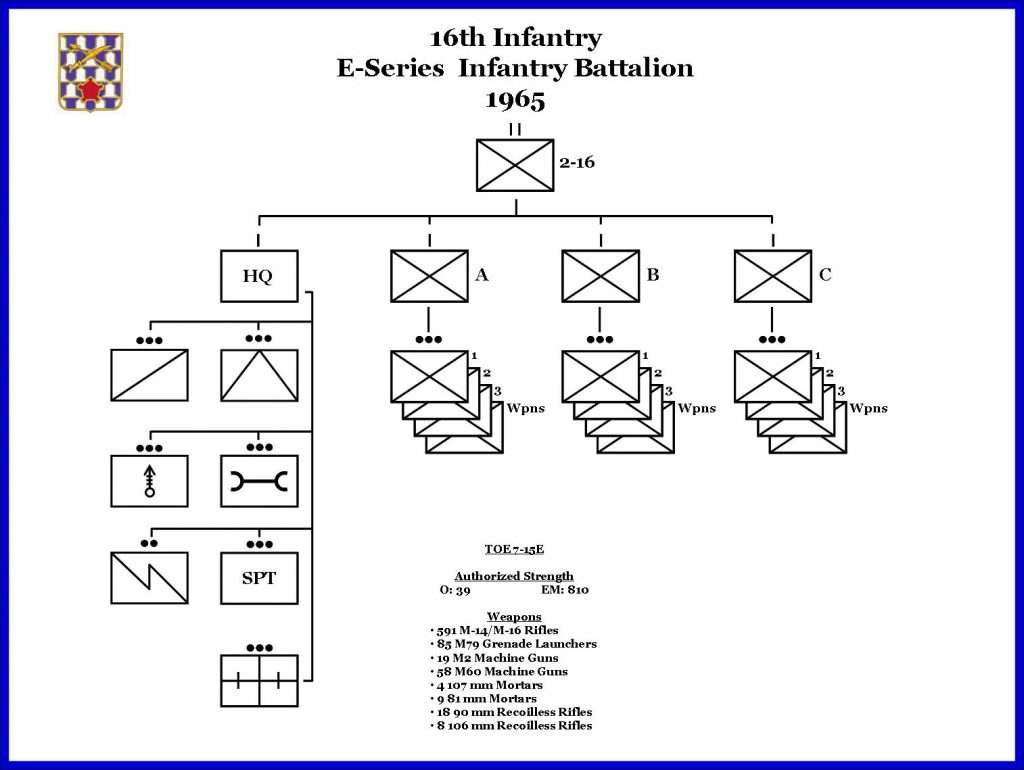