The “Cold War” began 8 May 1945, and the 16th Infantry was already deep in the in middle of it. The initial activities of the regiment in Czechoslovakia was to guard key facilities and conduct prisoner exchanges with the Soviets. Within a short time, the Soviets had rapidly become our new opponents. After about a month of POW exchanges, the regiment was moved to Bamburg, Germany in June 1945, where it remained until February 1946 when it transferred to Landshut, Germany. The regiment moved again in October 1946, when it became part of the occupation forces in Austria. The regimental headquarters was posted to Glasenbach, while the 1st Battalion moved to Vienna and the 2nd Battalion moved to Salzburg. The 3rd Battalion, however, transferred to Berlin, Germany, where it later became the only infantry unit to get credit for participation in the Berlin Airlift.

In July 1948, the regiment was reformed in Frankfurt, Germany, and then almost immediately railed to Grafenwöhr for a series of intensive training exercises designed to bring the 16th Infantry to wartime fighting proficiency. Unlike the previous three years during which the regiment was predominantly preoccupied with what were essentially Military Police duties, the regiment was now going to focus on staving off the Red threat to central Europe. To ensure they were ready, the regiment participated with the Big Red One in numerous European Command training events such as Exercises WINTERPRIME II, HARVEST, JUNIPER, COMBINE, and FERRYBOAT. The urgency of the mission increased in July 1950 when the Korean War erupted. Fear of a second communist front caused the disbandment of the U.S. Constabulary and the reinforcement of Germany with an armored division and three more infantry divisions in 1951.

The defense of the Fulda Gap became the 1st Infantry Division’s area of responsibility and also the 16th Infantry Regiment’s primary focus. Given the initial restrictions placed on U.S. Army soldiers regarding fraternization with German citizens (especially females) and the consumption of alcohol, the leaders of the 1st Infantry Division, as well as the European Command as a whole, looked for ways to keep soldiers busy and out of trouble when not on duty. One of the primary ways was a vigorous sports program and the Rangers partook in every competitive sport in an aggressive way. Indeed, in 1950, the Ranger football team fought its way to the top as the European Command champions. After the 1948 Grafenwöhr training exercises, the regiment had been posted to Monteith Barracks in Furth, Germany, and surrounding communities. It was during this period that the Security Platoon (also known as the Honor Guard) provided guards for the famous Nuremburg trials. In August 1952, the 16th’s headquarters was transferred to Conn Barracks in Schweinfurt, Germany, while the most of the regiment’s subordinate units were assigned to Ledworth Barracks in that city. Schweinfurt was to be the regiment’s last station in Germany before returning home. In 1955, the army tested a system of rotating units to Europe which became known as Operation GYROSCOPE.

In June 1955, the 16th Infantry Regiment became the first Big Red One unit to return to the United States via GYROSCOPE. The new duty station for the regiment, as well as for the rest of the Big Red One was Fort Riley, Kansas. In early 1957, the 1st Infantry Division began to reorganize under the Pentomic Tables of Organization and Equipment (TOE). An entirely new organization, the “battle group,” was to be organized. The 1st Battle Group at Fort Riley now remained the only element of the regiment assigned to the Big Red One,. After spending 2 years at Fort Riley, in March 1959, the 1st Battle Group was transferred to Baumholder, Germany, and assigned to the 8th Infantry Division. Over the next three years, the battle group functioned as part of the US Army Europe’s first line of defense against potential Soviet aggression against Europe. The next element of the regiment to actually organize under the Pentomic concept was the 3rd Battle Group, 16th Infantry.

In May 1959, the 3rd Battle Group was activated at Worcester, Massachusetts, and assigned to the 94th Infantry Division. On 7 January 1963, it was reorganized and redesignated as the 3rd Battalion, 16th Infantry and reassigned to the 187th Infantry Brigade (Separate). It was the first unit of the regiment to reorganize under what was known as the Reorganization of Army Divisions (ROAD) that eliminated the Pentomic structure of five battle groups. The 1st Battle Group remained at Baumholder until 1 April 1963 when it was reorganized and redesignated as the 1st Battalion, 16th Infantry and reassigned to the Big Red One at Fort Riley. Though the battalion was still active, only the colors and a few soldiers were sent back to Fort Riley. Six months later on 1 October 1963, the 1st Battalion, 16th Infantry was reformed at Wildflecken, Germany, by reflagging the 2nd Battle Group, 8th Infantry. Therefore, though technically designated as a battalion, the unit was still configured as a battle group. The plan was to reorganze as a battalion when the unit returned to Fort Riley in February 1964 as part of Exercise LONG THRUST X.

At Fort Riley, on 2 March 1964, the 1st Battalion was more or less split in two and the 2nd Battle Group was reactivated with the 1st Battalion’s excess personnel and concurrently reorganized and redesignated as the 2nd Battalion, 16th Infantry. The two active battalions of the regiment received a warning order in the spring of 1965 for deployment to the Republic of Vietnam. 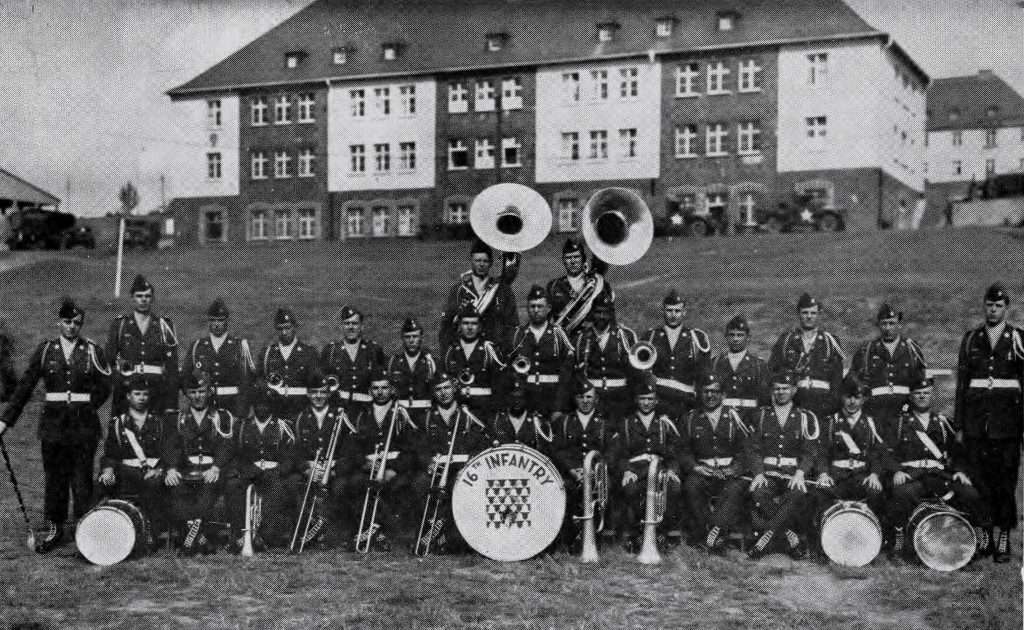 Band of the 1st Battle Group at Smith Barracks, Baumholder, about 1959.