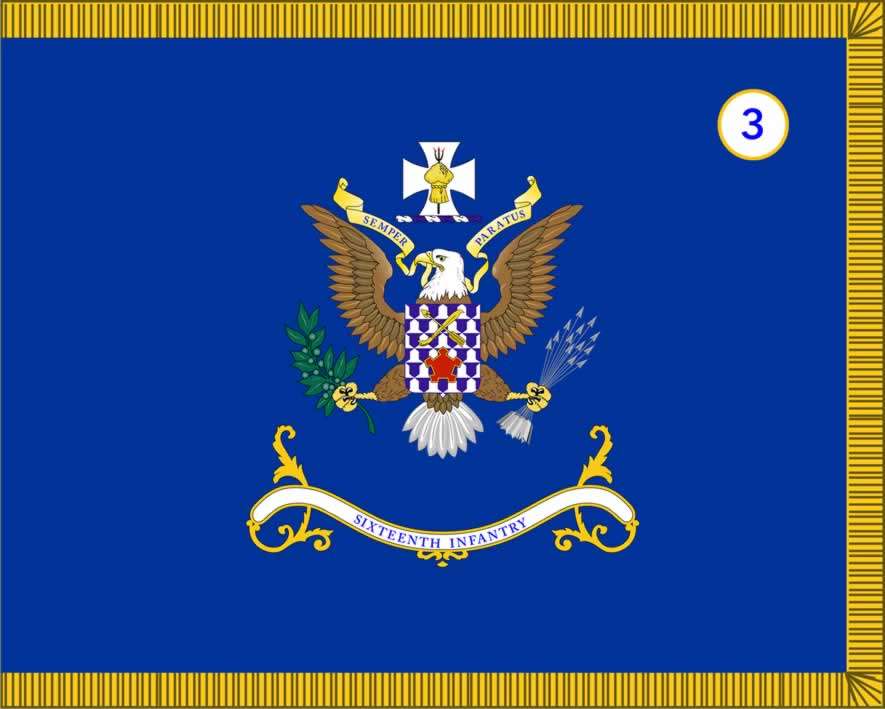 In the United States Army, most regiments, battalions of regiments, and separate battalions possess a stand of “colors.” The first is the National Color (i.e., the American flag) which is 36 inches by 48 inches in size trimmed with a 2.5 inch-wide gold fringe. The second is the Regimental, or Organizational, Color. The Regimental Color is the same size as the National Color. The background color of each varies with the branch of service for that regiment or battalion (e.g., blue for infantry, yellow for armor and cavalry, red for artillery, etc.) In the center of the Regimental Color is the eagle from the Great Seal of the United States, but with the shield of regiment’s coat of arms placed on the eagle’s breast, rather than that of the United States. The eagle has in its beak a scroll bearing the regimental motto. The crest of the regiment’s coat of arms is placed above the eagle’s head and the regiment’s name on a scroll below. The Regimental and Battalion Colors carry the various campaign participation credit streamers and awards streamers (such as Presidential Unit Citation) earned by the unit. Since few regiments of the US Army are active in the force structure, active battalions of combat arms regiments are authorized to carry the same color as that of the regiment but modified with a small circular device in the upper right hand corner of the fly with the battalion’s number affixed thereto.