On 29 June 1910 the troops of the 16th Infantry Regiment set sail aboard the USAT Buford at Seattle headed for Alaska. The Buford arrived at Haines, Alaska on 3 July, and the following day, the Regimental Headquarters, Staff, Band, Companies F, G, H, and K, and the Machine Gun Platoon disembarked to take station at Fort William H. Seward. The remainder of the regiment was taken to additional port locations on the Buford and took station as follows: Companies A and L at Fort Gibbon (they disembarked at Fort St. Michael and traveled up to Fort Gibbon via the Yukon River on the USS General Jeff C. Davis), Companies B and E at Fort Davis, Companies C and I at Fort Liscum, and Companies D and M at Fort St. Michael. All elements were at their new posts by 1 August. Life in Alaska for the members of the 16th Infantry was Spartan.

For six months out of the year (roughly October through April), the weather ensured that the main activity of the troops was surviving the cold. Secondary efforts were surviving the monotony of duty and canned food. The winters at all posts were cold and dreary, but for the soldiers at Fort Gibbon, in the interior of the territory, the isolation was most difficult. Clustered around a parade field on the north bank of the Yukon River, Fort Gibbon housed two companies of the 16th Infantry in barracks barely adequate for one. The post’s primary mission was as a station for the Alaska communications system, operated by a tiny Signal Corps detachment there. By October, the river would begin icing up, forcing the steamboats to remain downstream for the winter, and with them went daily contact with the outside world save what news came over the Signal Corps radios. Meanwhile, the snow began to fall and so did the temperatures. With the spring came the thawing of the ice and snow. In late July 1911, an unusually warm spring and early summer caused a higher degree of thawing of a glacier near Valdez. Water from the glacier flooded the streams that flowed into the town and threatened great damage.

For three days, the men of Companies C and I fought the floods and successfully prevented a major catastrophe for the townspeople. That same month, however, Companies F, G, H, and K had a different problem-that of fighting a forest fire that threatened the town of Haines. Meanwhile, with the thaw also came clouds of mosquitoes, which, at times, gave the men reason to wish for the snows to return. In April 1912 the 30th Infantry was directed to relieve the 16th Infantry of the north country posts. The following June, the companies of the regiment were assembled at the coastal posts, where they embarked on the USAT Sheridan over the last two weeks of the month. Weighing anchor on 1 July, the Sheridan sailed for the regiment’s new duty station, the Presidio of San Francisco, where it arrived on 22 July 1912. 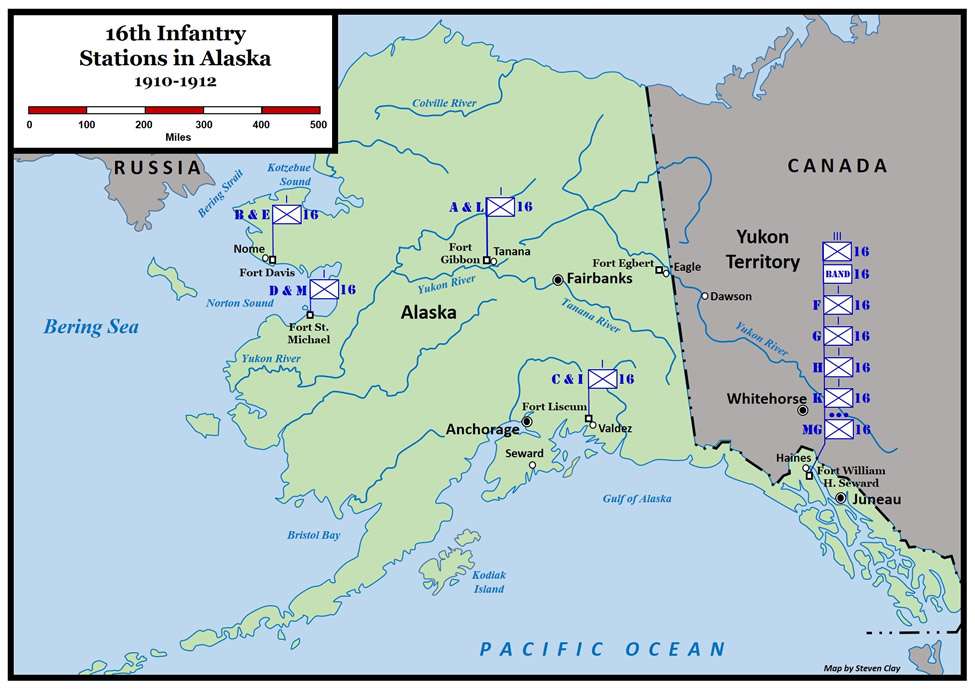