Regimental Stations in the Philippines 1899-1902

After the United States declared official possession of the Philippines and its intention to maintain political control over the archipelago, “Insurrectos” under the leadership of Emilio Aguinaldo began active operations against the American occupation forces. Against a force of 40,000 insurgents, A call went out for reinforcements to crush what eventually became known as the Philippine Insurrection and the 16th Infantry was ordered overseas for its second war on foreign soil in less than a year. The regiment disembarked on 1 July and headquarters was set up at La Loma Church. While occupying this area, the regiment engaged in aggressive patrolling and outpost duties. On 2 August, the regiment was assigned to protect the Manila & Dagupan Railroad from attacks or sabotage. On 14 August Companies F and I scrapped with a force of about 330 insurgents under the command of “General” Pio de Pilar, who were intent on cutting the line near Guiguinto.

Other insurgent activity along the railroad consisted of small unit actions and almost constant nightly pinpricks punctuated by occasional determined enemy efforts. It was an experience not unlike that which future 16th Infantrymen would have to face in Viet Nam. The major action of this period took place on 4 December 1899 on an expedition to San Ildefonso where the insurgents were manning entrenchments on a hill overlooking the town. An ad hoc battalion of the 16th Infantry, with elements of the 3rd Infantry, attached assaulted the trenches and after about an hour of hard fighting the insurgents were routed. After several days of skirmishing around that town and San Miguel, the regiment was relieved of the guard mission for the Manila and Dagupan Railroad on 19 December and ordered to northern Luzon. The regiment arrived at Aparri two days later. Station assignments were designated as follows: Headquarters, Band, and 1st Battalion stationed at Aparri, the 2d Battalion with Companies G and H at Ilagan, Companies E and F at Tuguegarao, and the 3d Battalion, 200 miles to the south in Nueva Viscaya Province. In northern Luzon regiment participated in numerous small skirmishes throughout the region.

Most actions involved detachment-size patrols of ten to forty-five men who ran into mostly unsuccessful ambushes. Sometimes, however, the fights were desperate. Such was the case on 14 September 1900 when a detachment under the command of Sgt. Henry C. Schroeder at Carig was attacked by 350 to 500 insurgents. For over four hours, the enemy attempted to rush the Americans, but Schroeder’s steadfast leadership kept up the men’s willingness to resist. For his superb leadership in the face of overwhelming odds, Schroeder was awarded the Medal of Honor, becoming the regiment’s third recipient of that award. By 1902 the districts under the administration of the 16th Infantry had become the most orderly on the island. Orders arrived in March directing the 5th Infantry to relieve the 16th of the Cagayan Valley posts late that spring and the 16th Infantry was ordered back to the United States to take station at Fort McPherson, Georgia. 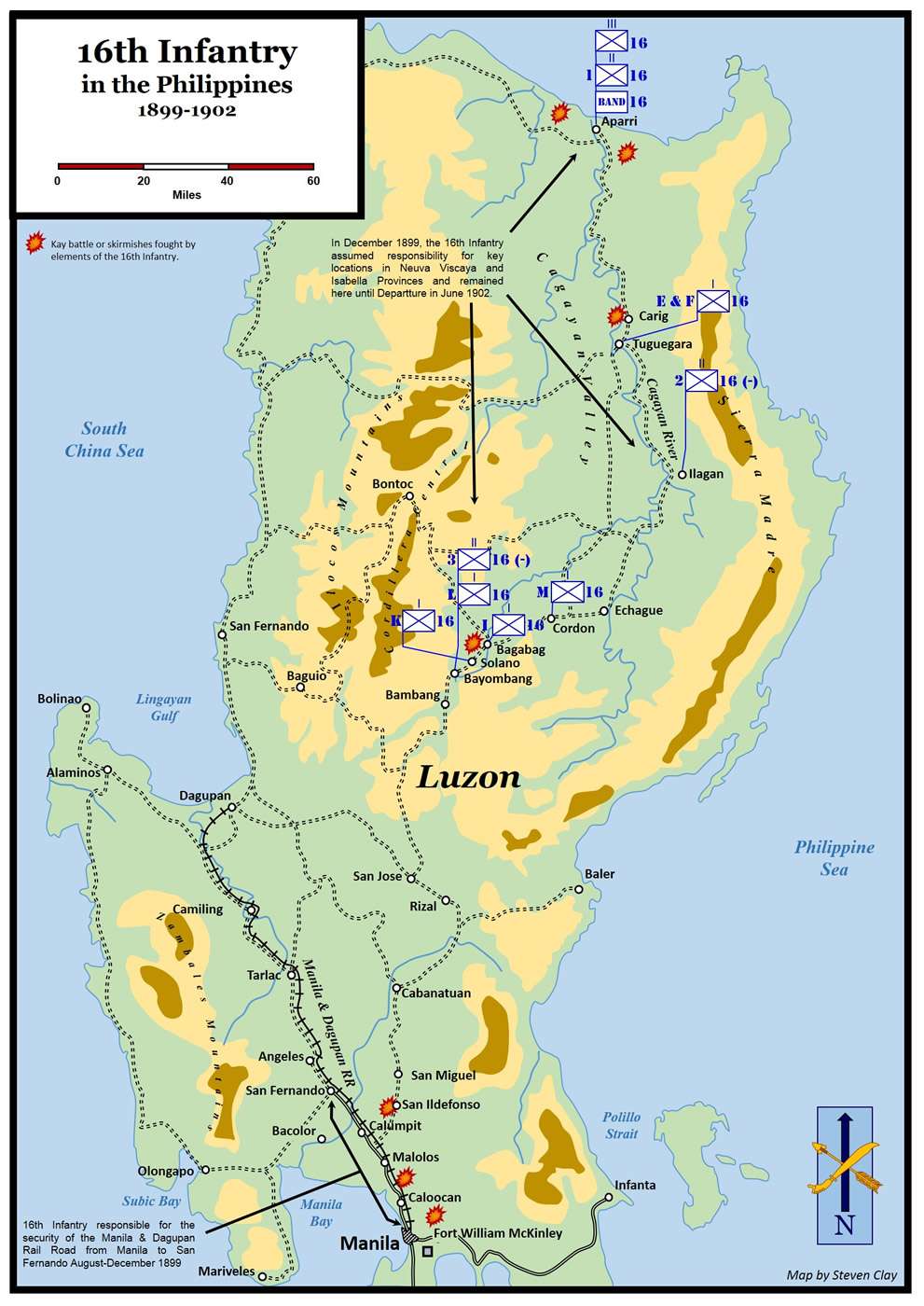