The call for war in the winter and spring of 1898 was too much for politicians to resist, so the country committed itself to armed conflict with Spain. No one was surprised when orders were received to move to Tampa, Florida. At Tampa, the 16th Infantry was brigaded with the 6th Infantry, and with the 71st Infantry, New York National Guard. Together, these regiments formed the 1st Brigade, 1st Division, V Corps. The regiment began embarking on the USCT San Marcos. And on 24 June 1898, the regiment disembarked at Siboney, Cuba and went into camp near that point. As the buglers sounded reveille at 3:30 a.m., 1 July, the troops of Hawkins’ 1st Brigade began to stir. The immediate objective of the 1st Division was to assault San Juan Hill. Nearby, a few hundred yards northeast of San Juan Hill, was Kettle Hill, the objective of Brig. Gen. Joseph “Fighting Joe” Wheeler’s cavalry division. Defending the hills around Santiago was the Division Santiago de Cuba, a mixed force of Spanish Regulars sent over from the Home Army in Spain to suppress the insurrection, units of the Spanish Colonial Army, and Cuban loyalist volunteers. The 1st Brigade’s route of march was a narrow trail, which caused the column to move sluggishly, as the humid, oppressive summer heat began to make itself felt.

With B Company, commanded by fifty-eight-year-old Capt. George H. Palmer, in the lead, the regiment’s advance was slow and tedious. After passing the 1st Division Field Hospital, the column rested in place for about an hour, then resumed the march. At 7:00 a.m. another thirty-minute halt was made about a mile east of a trail junction that was the site of an old sugar refinery called the El Pozo House. Here, the troops were ordered to leave their packs to lighten their load and reduce fatigue. Continuing the march, the regiment passed the El Pozo House and quickly came under fire from Spanish cannon and rifles. The fight was now on. Orders came down the line for the regiment to move up to support the now engaged 6th Infantry on the right. To accomplish this, the men had to pass the troops of the 71st New York, who were laying flat in the path to avoid Spanish bullets. Once past the 71st New York, the 16th’s trail began to wind, and numerous other trails converged with, and lead away from, the correct trail which caused elements of the regiment to get separated. To make matters worse, as the troops struggled through the thick foliage along the trail, they continued to receive fire from unseen Spanish riflemen. Gradually, the fire became heavier and casualties began to mount, but the regiment was unable to deploy due to the jungle. The regiment struggled along the trail for another hour and a half before it turned onto another trail leading westward to the San Juan River. 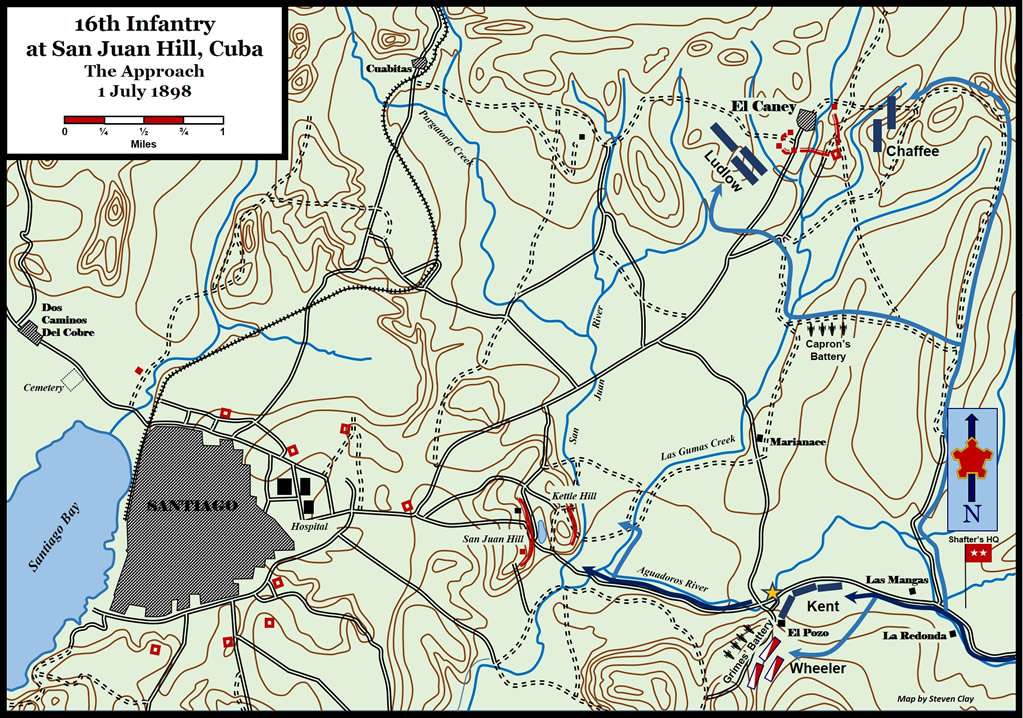