On reaching the San Juan River, the companies of the 16th Infantry Regiment began fording at separate points. At one location, which became known as “Bloody Ford,” the regiment took many of its casualties as Companies A and D moved across. Capt. Theophilus W. Morrison, commanding D Company, was killed by rifle fire at this ford as he led his troops across. On the far side of the San Juan, officers and NCOs struggled to get six companies of the 16th Infantry into battle lines for the 800-yard assault up San Juan Hill. Once in position, the fatigued troops threw themselves down along a sunken road to rest and to take cover from the rifle fire. The scorching heat and humid conditions were also taking a heavy toll on the men. For some reason, Companies F and H had been diverted from the regiment by a staff officer with the 1st Brigade were linked up with the 6th Infantry on the right. They would make the charge up the hill with that regiment. Once the 6th and 16th Infantry Regiments were ready, Gen. Hawkins and Brig. Gen. Jacob F. Kent, the 1st Division commander, arrived and ordered the assault to go forward about 2 p.m.

As the regiment moved forward, it quickly encountered a barbed-wire obstacle that checked its advance. The obstacle consisted of six wire strands and was strongly anchored, primarily to trees and an overgrown hedge. Beyond the fence was a relatively steep, open slope covered with high grass through which the regiment had to advance. The San Juan Hill blockhouse stood in plain view on the hill beyond the open ground. For about fifteen minutes, the troops worked their way through the obstacles under increasing volumes of fire. Using bayonets and rifle butts, they attempted to break the wire and uproot posts. As the troops struggled to get through the wire, a U.S. artillery battery under Capt. George S. Grimes near the El Pozo House began to find the range of the Spanish entrenchments. The artillery fire initially caused much confusion in the regiment because some of the rounds landed short as they advanced. At one point, Captain Charles H. Noble, leading the 2d Battalion which was now half way up the slope, received word from Colonel Theaker, regimental commander, to fall back. Noble was stunned. He was reluctant to return but nonetheless, Noble returned his men to the foot of the hill. On the positive side, he found a better approach to the top but he still lost valuable time in making his assault. 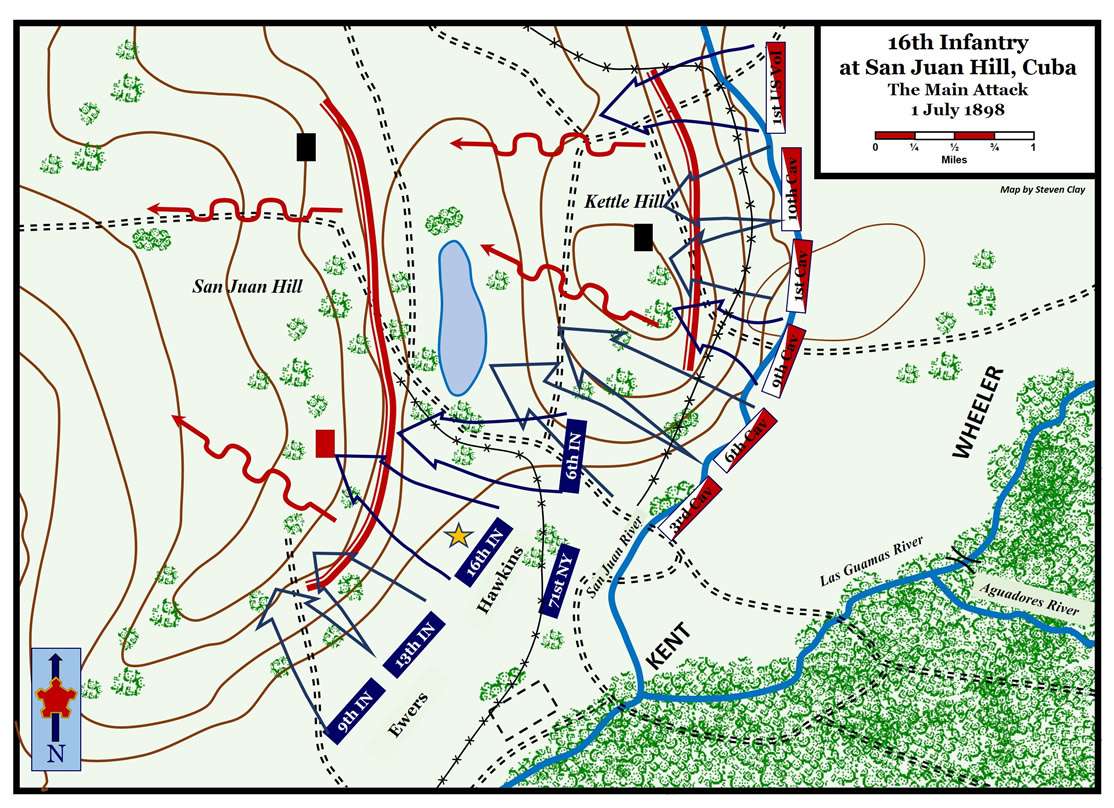