By the time that most men had made their way through the barbed wire obstacle, the movements of the regiment had really degenerated into clumps of companies and small groups of men here and there that moved independently of each other. Little remained of a what could be called an “assault line.” Spanish fire became so intense that company commanders of the regiment, as well as the troops, realized that they could no longer wait for the regimental commander or for an organized charge as a regiment. Separately, companies began to charge up the hill, firing as they advanced, without stopping to take up support positions. Leading the regiment’s attack was E Company under Capt. William C. McFarland. Under McFarland’s leadership, E Company was the first unit to storm the top of the hill and root out the remaining Spanish defenders who had not already fled to the next line of defenses. To the left of E Company, Company A, under First Lieutenant Richard R. Steedman, made for the hill as well.

On reaching the summit, Capt. Samuel R. Whitall, commanding H Company, directed his men to seize the blockhouse and the immediate surrounding area. Upon doing so, the H Company troopers opened a brisk fire on the retreating Spaniards now in the process of moving to the next trench line toward Santiago. During the movement up the trail, the regimental color sergeant from F Company was struck and killed. Corporal William G. Van Horne seized the color and fell in next to Sergeant John P. Diehl, who carried the national color. Originally supposed to move with F Company (the color company), the two became separated and ended up with H Company and made the attack up San Juan Hill with that unit on the right of the line. The color bearers carried the colors furled until just before reaching the summit. They then shook them out and waved them furiously as they reached the crest. However, for twenty minutes after the capture of the summit, the troops on the top continued to receive fire from friendly units to the rear that were still moving to get to the top. Sergeant Diehl began to move along the crest waving the U.S. color to signal the units to cease firing. A short time later, Lieut. John F. Preston, Jr. did the same with the regimental color and, finally, the friendly fire ended. By about 3:00 p.m., all companies of the 16th Infantry were on the hill and preparing the position for defense. 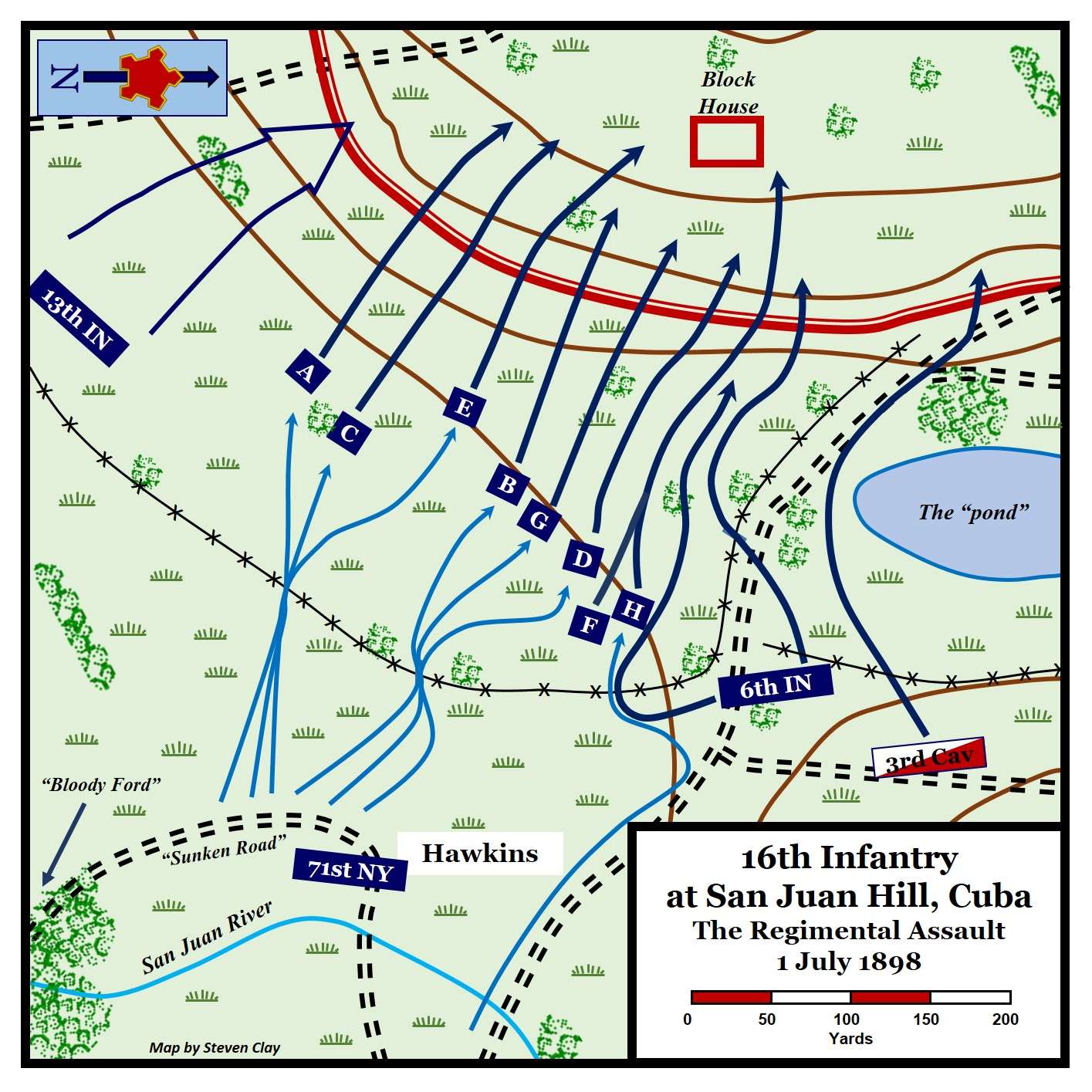