After the inconclusive fighting at the North Anna River, the 11th U.S. Infantry, along with the 1st Division, led the V Corps on its march toward Hanovertown. The regiment crossed the Pamunkey River there on 28 May and continued the advance toward Mechanicsville and Cold Harbor. It crossed Totopotomy Creek on the 29th, and encamped near a place called the Via House that evening. As part of a general reconnaissance by the 1st Division on the 30th, Ayres’ brigade moved west on the Shady Grove Church Road behind that of Sweitzer. About 3:00 p.m., Sweitzer’s brigade encountered skirmishers from Pickett’s Division. Pushing the rebels back, Sweitzer’s men continued forward until reaching a clearing where they were brought under fire from artillery near Hundley’s Corner. Sweitzer had found the Confederate main line. Griffin deployed his brigades along the Shady Grove Road, with Bartlett to the north of Sweitzer, and Ayres refused his line back to the east to tie in with Crawford’s 3rd Division.

Meanwhile, Crawford sent Hardin’s Brigade to recon south along the Walnut Grove Road to its intersection with the Old Church Road. Just after it reached the intersection, it was struck by Rodes’ Division charging up the Old Church Road in an attempt to find and turn the V Corps left flank. The Federal brigade was quickly routed and flew headlong up the road toward Beaver Dam Creek. On seeing Hardin’s men break, Col. Charles Wainwright, chief of the V Corps artillery, sped away to find his batteries and bring them forward to bolster the main Federal line near the Bowles House. Rodes’ Division continued northeast up the Old Church Road while Ramseur’s Division swung north and headed for Crawford’s line. The switch in attacking forces gave Crawford time to pull his advanced brigades north of Beaver Dam Creek and form a reasonably solid battle line. Additionally, Wainwright soon arrived with three batteries which he placed into position near the Bowles house. Soon, Ramseur’s men attacked the patch work line.

As Crawford’s men received the brunt of the attack, Ayres’ troops were able to provide supporting cross fires to their left front into the flanks of Ramseur’s men. The combined efforts of Ayres, Griffin, and Wainwright’s artillery held Ramseur in check. Along the Old Church Road, the 2nd Division stifled Rodes’ attack in that direction. About 6:00 p.m., Early renewed the attack against the V Corps with Gordon’s Division which had just arrived on the field. Ramseur pushed forward again, but by now, Crawford and Griffin’s troops had had time to further improve their works. The Federal fire was incredibly destructive. Caught in the cross-fire of artillery, Crawford’s infantry, and Ayres’ Regulars, the Confederate attack melted away. 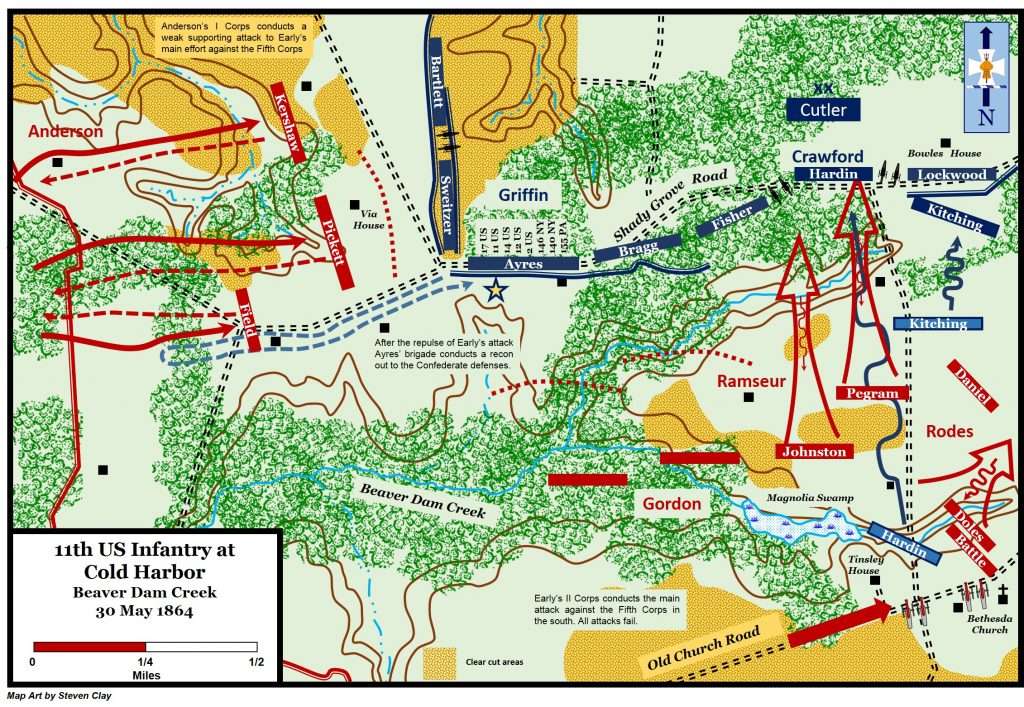