Over the next two days after the fight at Beaver Dam Creek most of the fighting in the Cold Harbor area occurred south of Bethesda Church. As the Army of the Potomac shifted south, the V Corps shifted slightly also. The 1st of June found the V Corps in positions centered on the Old Church Road about a half mile west of Bethesda Church. To the north, Hancock’s II Corps was directed by Meade to march south behind the IX and V Corps to participate in a three-corps attack to be conducted on 2 June. The IX Corps was to follow the II and refuse the army’s flank.

The night of 1 June, Hancock pulled out, but Maj. Gen. Ambrose P. Burnside did not get the word that the II Corps was leaving the army’s right flank until the following morning. Therefore, Burnside’s IX Corps would have to perform a daylight withdrawal. Early was looking for just such an opportunity and was quick to order an assault against the IX Corps when he realized it was pulling back late on the morning of 2 June.

About 1:00 p.m., the V Corps commander, Maj. Gen. Gouverneur Warren, observed dust clouds to his northeast and accurately guessed that Early was about to launch into the retreating IX Corps. Taking a great deal of risk, Griffin shifted Bartlett’s brigade to help fill the gap between him and the flank of Burnside’s left-most brigade. The move now created another dangerous gap between the Regulars and Bartlett’s brigade to the northeast.

About 2 p.m., covered by a driving thunderstorm, Early’s entire corps fell on the hapless IX Corps and the right flank of Griffin’s division. Gordon’s Division drove headlong into the gap between Ayres’ and Bartlett’s brigades. Supporting Gordon to the west, Ramseur’s Division pushed toward the Regulars down the Old Church Road. Soon, the line became a swirling battleground as friend and foe commingled in a desperate struggle. The position had become untenable, and the order was given to fall back to a new line near Bethesda Church. On Ayres’ right, Gordon’s troops were successful in capturing a portion of the 91st Pennsylvania.

The 11th Infantry did not go unscathed either. In the confusion of the fight, many men did not get the order to fall back and dozens of men, mostly from F Company, were captured. As Ayres’ men withdrew, the brigade on his left and Bartlett’s brigade fell back as well, and the line was finally solidified virtually on the grounds of the church. By the time that Griffin organized the new position, Early’s men had slowed and the attack dissipated against the new line. Though the 11th suffered only one officer and six enlisted wounded at Bethesda Church, forty-three men were listed as missing and were later determined to have been captured during the fight that day. 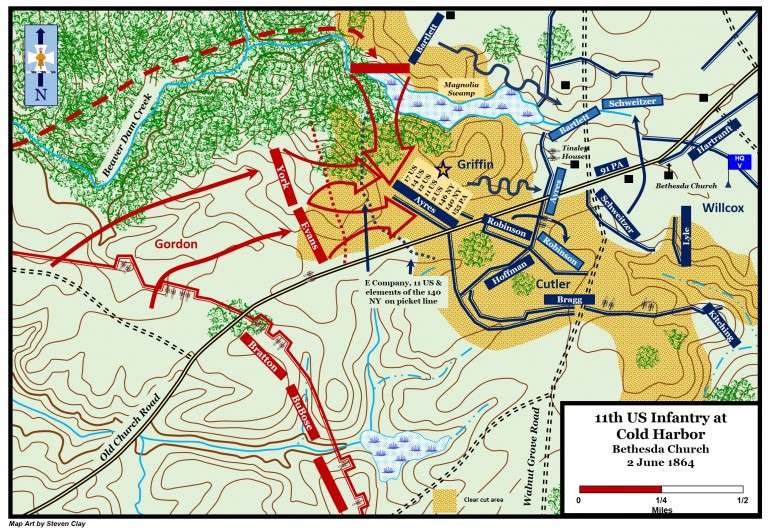