Battle of Chancellorsville 1 May 1863

After spending the winter at Potomac Creek and receiving a new commanding general, Joseph Hooker, the Army of the Potomac prepared for a new spring offensive in April 1863. On 27 April, the Fifth Corps departed its camps and headed for Ely’s Ford on the Rapidan. By 30 April, the corps was camped near Chancellor House. Hooker ordered Major General George Meade, the new Fifth Army Corps commander to lead the advance down the Orange Turnpike towards the rear of Fredericksburg the next day. That morning, Sykes Regulars lead the corps forward, and the 2nd Brigade, which included the 11th U.S. Infantry, lead the division. Just past Flat Run, the 2nd Brigade began to encounter skirmishers from the 12th Virginia, a regiment of Mahone’s brigade. Near the Lewis house, the Regiment captured several of these men, advance to a rise just to the east. From there the Regulars could see the Confederate battle line on the next rise and soon a brisk fire of small arms and artillery ensued.

The Regulars of the 1st Brigade soon came up on the left and additional troops from the 3rd Brigade deployed to the right into the woods. Unfortunately, after such a splendid advance, the Federal columns to the Fifth’s north and south moved too slowly to come up on the flanks and soon, Sykes’ men were in danger of being attacked in flank by additional troops coming up from Rodes’ Confederate Division. Hooker ordered Meade to pull back around the Chancellor House and the corps was able to accomplish this movement in good order. 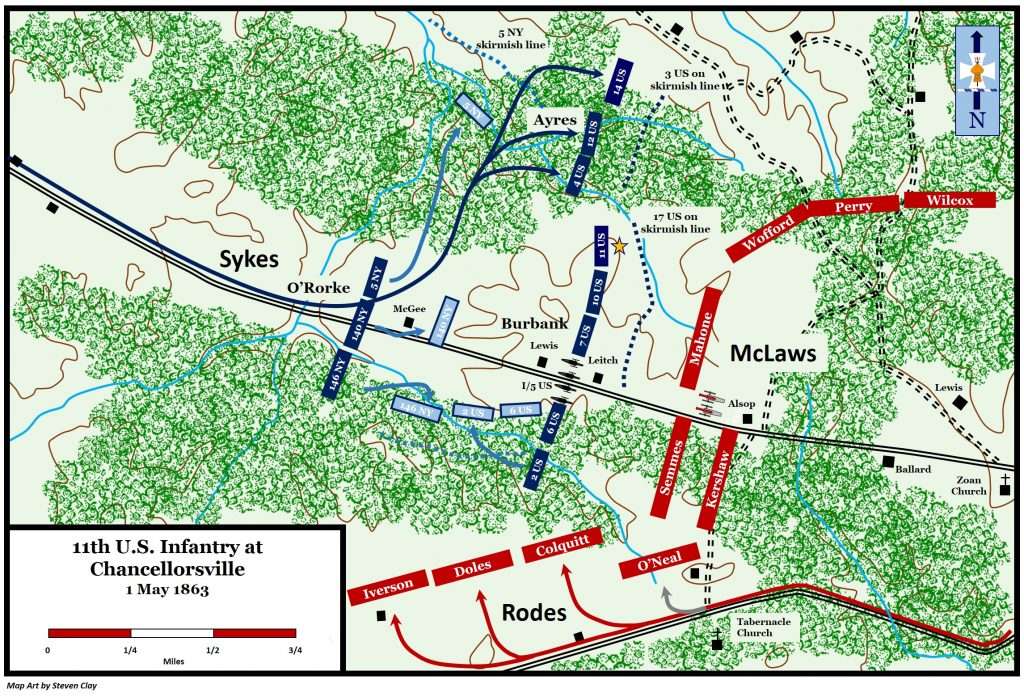