In November 1862, after a brief pause near Warrenton to install Major General Ambrose Burnside as commander, the Army of the Potomac raced Lee’s Army of Northern Virginia down to the Rappahannock River where the Confederate general was able to establish a significant defensive line at Fredericksburg before Burnside could get his pontoon bridges to the town. The Federal command set up camps just northeast of the town near Potomac Creek and on 11 December, Burnside began operations against Lee’s command by building pontoon bridges at three locations.

On 13 December massive Union attacks took place against Lee’s command which was now drawn up in breastworks and trenches on the bluffs west and south of Fredericksburg. Resting on the bluffs east of town (1), the Regulars watched wave after wave of these attacks fail against the formidable defenses of Marye’s Heights. Late in the afternoon, the Fifth Corps was called forward and crossed over into the town. Sykes’ command moved north along Caroline Street and waited briefly until called forward (2).

In the early dark of the cold, winter evening, the Regulars took up initial positions in and near the low ground of millrace just west of town (3). Just before midnight, the division moved once again, this time to positions only about 80 yards south of the infamous “stone wall” of Marye’s Heights which harbored thousands of Lee’s battle hardened infantry troops and several batteries of artillery (4). The plan was for an early morning assault against the rebel position, but the attack never took place. Instead, the Regulars lay prone all that night and the next day amongst hundreds of badly mangled bodies, the terrible results of the failure of other Union brigades to breach the wall the day before.

The stranded soldiers were unable to hardly move, many of them even to roll over, because to do so would draw a fusillade of bullets from the deadly rebel marksmen. On the night of 14 December, the Regulars thankfully withdrew back into the town (5) and remained there until the morning of 16 December, when Sykes Regulars covered the withdrawal of Federal troops to the east side of the Rappahannock. 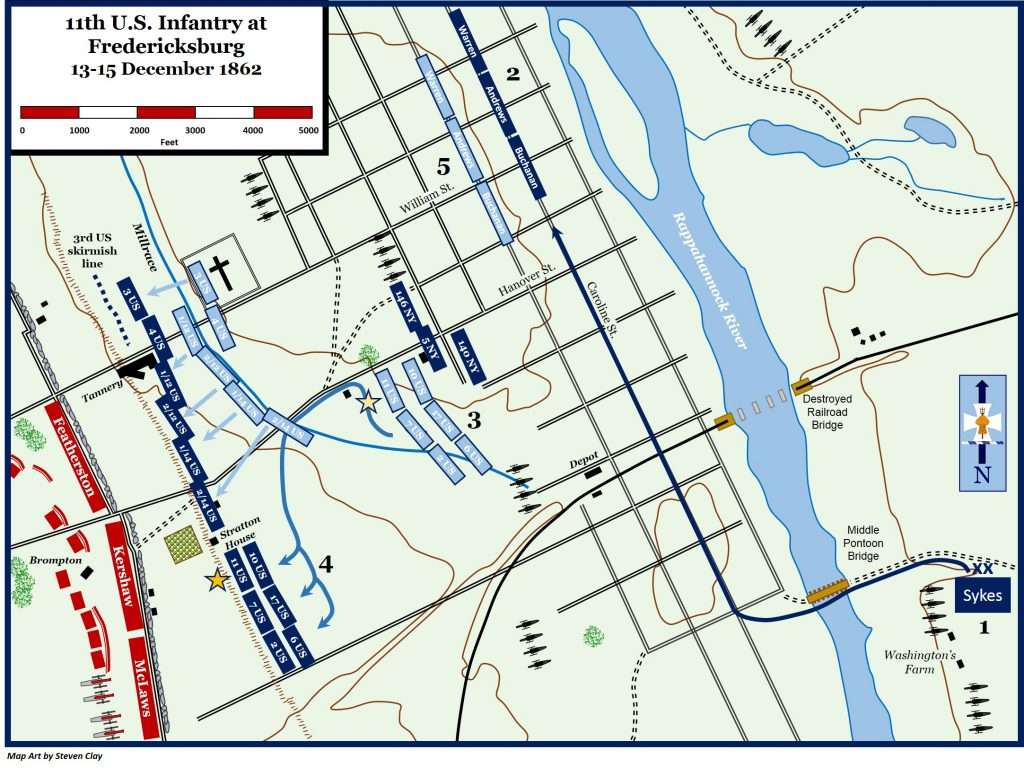