When Griffin’s Division reached Jericho Ford on the North Anna River the afternoon of 23 May 1864, the troops found the crossing undefended so Griffin immediately ordered Sweitzer and Ayres to cross their brigades. After a brief skirmish with a South Carolina brigade picketed there, both brigades advanced into the woods to their front. Moving to positions well into the stand of timber, the two brigades halted and immediately began chopping trees and digging entrenchments and were soon followed by the rest of the V Corps.

About 5:30 p.m., Union pickets reported heavy dust being kicked up on the road to Hanover Junction. Suddenly, a great rebel yell pierced the evening air and gunfire exploded to the Regulars’ front. Peering to the far side of the wood, they could see a huge gray line heading right for them. The troops of Sweitzer’s and Ayres’ brigades, unstacked their weapons, leapt to their works, and commenced a heavy fire against Brown’s South Carolinians, and Brig. Gen. James H. Lane’s North Carolinians. To the rear, Cutler’s 4th Division scrambled to grab their rifles and set out to reach the high ground on the corps’ right where it should have been all along. But as the division deployed to advance, the two brigades forming Wilcox’s left wing crashed into the Pennsylvania Bucktails, and the “Iron Brigade,” driving them back toward the river. On the Federal right, only one brigade held. Sweitzer’s brigade also fell back, though in good order. Only Ayres now held in the center.

The attack had interrupted the men’s evening meal, which upset them in no small way. According to one account, the Regulars, angry over their lost suppers, “waited until the Confederate line came within point-blank range and then opened fire with a vengeance.” Back on the Union right, three batteries pulled into position amidst the shaken 4th Division. The presence of the artillery heartened the men and soon, many stragglers who had fled to the bluffs gathered their courage and returned to the fight. Having sustained heavy casualties in their own assaults at Saunder’s Field and Laurel Hill, the Regulars now had the grim satisfaction of dishing out the punishment for once. As the rebels retreated to Noel’s Station, Federal officers led a rousing cheer which echoed through the woods “in a tremendous roar of victory.” The steadfast performance of the regiment earned the men of the 11th Infantry a note of congratulations in Gen. Meade’s order of the day. 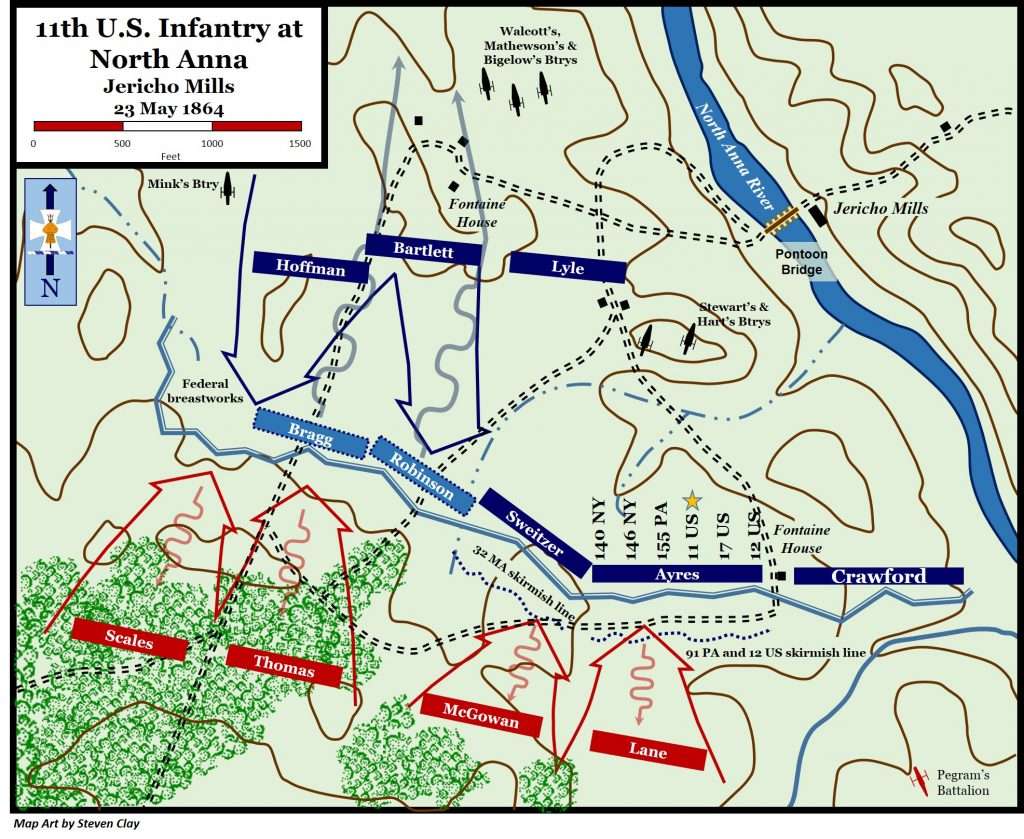