Throughout September 1864, the 11th U.S. Infantry, under the command of Captain Francis Cooley, continued to improve its defenses and guard the Weldon Railroad, but late in the month, it was ordered to move forward as part of a general corps advance. The regiment participated in several sharp actions near Poplar Springs Church, assisting in Gen. Warren’s effort to punch a hole in the Confederate lines and cut Boydton Plank Road, another key rebel supply route into Petersburg and Richmond. On 30 September, the 1st Brigade participated in the 2nd Division attacks on the Confederate entrenchments around Peeble’s Farm. The brigade was directed to advance from near Fort Wadsworth, northwest along the Poplar Springs Road, then northeast on the Squirrel Level Road, where it linked up with the 3d Brigade, 1st Division. There, the Regulars relieved the 3d Brigade of possession of Fort Bratton (recently vacated by the 4th North Carolina Cavalry). Capt. Cooley selected positions to the west of the fort supporting the 15th New York Heavy Artillery.

The 5th and 146th New York Regiments were in Fort Bratton itself, the 14th U. S. Infantry on the east of the fort, and the 17th U. S. and 140th New York were held in reserve. About 9:00 o’clock the following morning, their nemeses from the initial Weldon fight, Harry Heth’s North Carolinians, attacked in a pouring rain in an attempt to retake the fort but were severely mauled by the heavy fire from the Regulars and New York infantrymen. The Tarheels were followed in piecemeal attacks by Brig. Gen. James J. Archer’s Virginians, then by Brig. Gen. Joseph R. Davis’ Mississippians, that were also beaten back with severe losses. Gen. Heth soberly declined to attempt further assaults against the position. The 1st Brigade’s endeavors at Fort Bratton ensured that the Union positions won at Peeble’s Farm the day before remained secure and were integrated into the Federal lines. 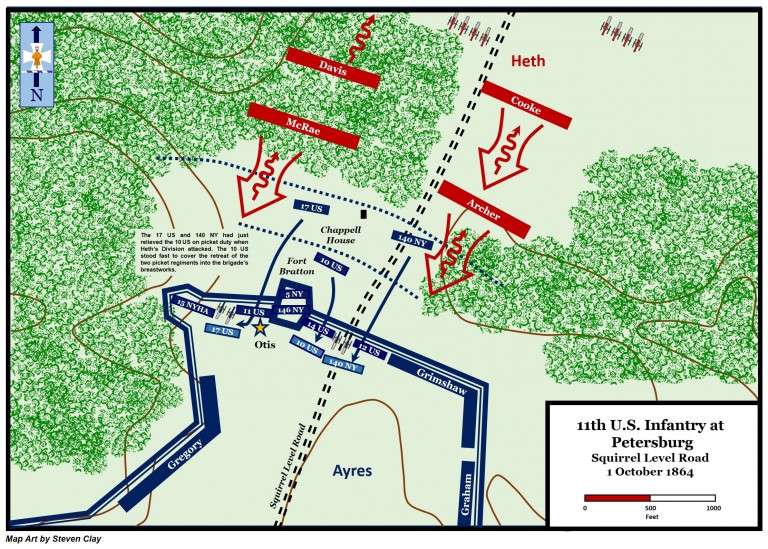