Early on 18 August 1864, the Regular Brigade, Colonel Joseph Hayes commanding, was sent with the V Corps on a mission to seize a portion of the Weldon and Petersburg Railroad south of Petersburg near Globe Tavern. Trudging west over poor trails and through hot, steamy woods for five miles, the regiment, under the command of Captain Joshua S. Fletcher, struck the line about 10:00 a.m. near Globe Tavern. As the 1st Division began ripping up the rails, Ayres’ 2d Division took up hasty defenses about 500 yards north of the tavern, straddling the railroad with the Regular Brigade on the right, the 15th New York Heavy Artillery and the 3d Brigade on the left, and the 2d Brigade on the far left, connected to elements of the 1st Division. The 11th Infantry’s left was the railroad embankment.

To ensure that the rebels could not rebuild the road, the regiment remained in position near the Davis farm, guarding the line, and building breastworks during the night of 18-19 August. After spending most of the 19th ripping up rails and improving defenses, the V Corps was attacked about 4:15 p.m. by Brig. Gen. William Mahone’s division. Locating a gap on the right of the Federal line, Mahone’s Virginian’s swept through and bypassed the Pennsylvania Reserve Brigade of Crawford’s 3d Division, now posted to the right of the Regular Brigade. In the ensuing attempt to fall back, friendly units masked the fire of those to the rear, causing much confusion, and the 1st Brigade was forced to withdraw by the press of the onrushing rebels. Having flanked and overrun the Pennsylvania Reserves, Mahone’s men now swept toward the railroad in an attempt to get behind the 1st Brigade’s battle line. Hayes was captured attempting to reach the brigade line, so command of the Regular Brigade devolved to Colonel Frederick Winthrop of the 5th New York. To save the brigade, Winthrop ordered the commanders of the 12th and 14th U.S. to hold the breastworks while the remainder of the brigade fought its way to the rear.

The 187th Pennsylvania was ordered forward to save the regiments at the barricades, but their valiant effort was largely for naught, as the two forward Regular units had all but evaporated by the time the 187th reached them, most having been killed or captured. Fletcher managed to lead the 11th U.S. Infantry back with the other regiments. There he rallied his men and, with a rush, counterattacked into the now disorganized Virginians, driving them out of their hard won position. Though all Regular regiments fought with extreme valor that day, the 11th U.S. seems to be the one unit that held the rest of the 1st Brigade together as a fighting force, such as they were able to manage in the melee. Colonel Francis Winthrop, in his report of the action that day singled out the acting regimental commander of the 11th Infantry: “While awarding great praise to every one of my regimental commanders, I cannot but mention the name of Captain J. S. Fletcher, commanding the 11th Infantry, for the skill and calmness with which he manoeuvered his regiment, although for a long time the only officer remaining with it.” 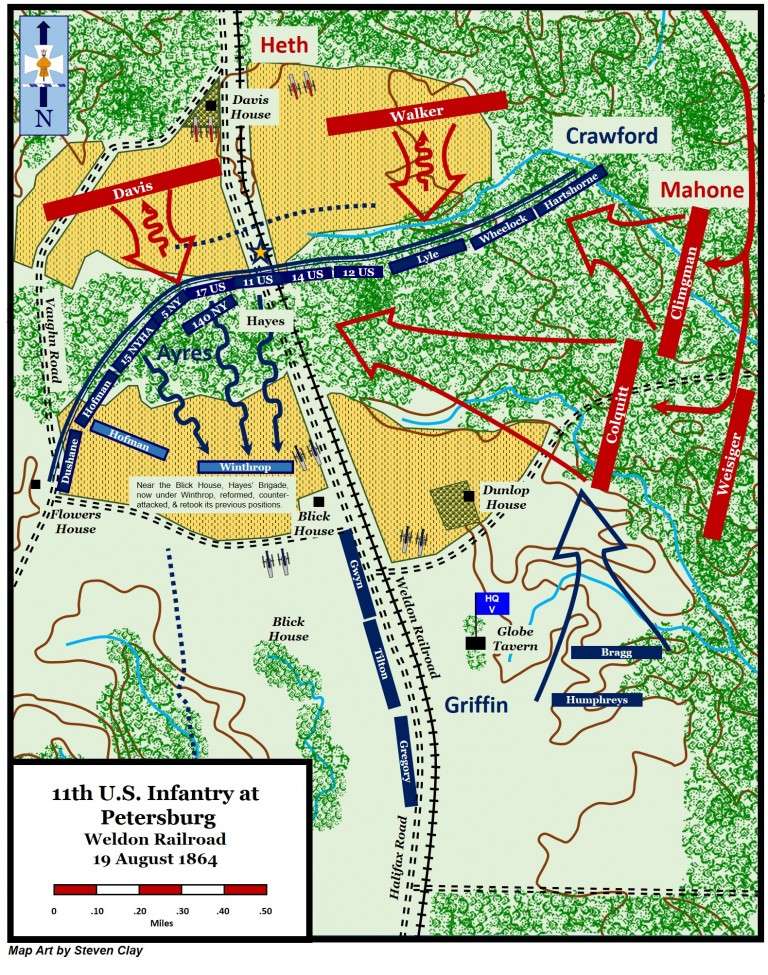