Crossing the Chickahominy River on 12 June 1864 at Long Bridge, the 11th U.S. Infantry turned west with the V Corps and moved to a blocking position near Riddell’s Shop until the remainder of the army was across the James River. Closing with the army, the corps camped near Charles City Court House on the 13th. The night of 16 June, the 11th Infantry crossed the James River on transports and arrived in front of Petersburg at daybreak on the 17th. On the 18th participated in its first attack of the Petersburg Campaign, this time against the veterans of Maj. Gen. P. G. T. Beauregard’s command.

The attack jumped off at 4:00 a.m. and made surprising progress. Surprising that is, in that Beauregard had repositioned his troops about a mile closer to Petersburg under the cover of darkness the night before. On arrival at the empty Confederate trench line, Federal commanders set to work preparing for the next advance toward the new but still weak rebel positions. The Union generals took too much time to begin the attack and Beauregard was reinforced in the meantime by the arrival of A. P. Hill’s corps from the Army of Northern Virginia. Moreover, the Union attack that afternoon was poorly coordinated and therefore beaten back with heavy losses including among the troops of the 11th Infantry. The regiment was ordered to remain in place before the Confederate works and prepare entrenchments that night. It occupied that position southeast of Petersburg between the Jerusalem Plank Road and the Norfolk and Petersburg Railroad until 28 June, when the regiment was relieved and moved into a camp on the Avery Farm, about a mile to the rear. 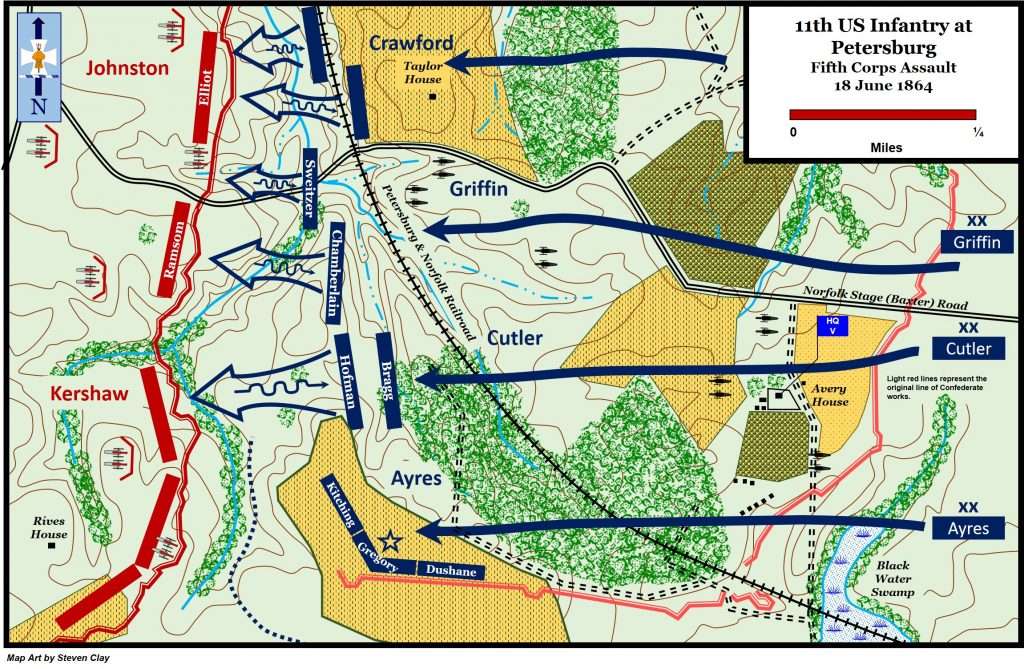