On 2 August 1990, Saddam Hussein’s Iraq invaded Kuwait. This act precipitated U.S. military involvement in the Persian Gulf. As part of the general mobilization for this conflict that fall, the 2nd and 5th Battalions, 16th Infantry were alerted for deployment on 8 November 1990. The battalions deployed to Saudi Arabia soon after with the rest of the 1st Infantry Division (Mechanized) as part of Operation DESERT SHIELD. On the morning of 24 February 1991 the Big Red One spearheaded the armored attack into Iraq, by creating a massive breach in the enemy defenses just inside Iraq. The breach was designed to allow other VII US Corps units to pass through the initial Iraqi Army forces and drive deep into Iraq. In the initial assault the 1st Infantry Division broke through the Iraqi 26th Infantry Division, destroyed it, and took over 2,500 prisoners. In the initial stages of the operation, that is just before, during, and after the breach made in the 2nd Brigade’s sector, the major problem faced by the Rangers of the 2nd Battalion, 16th Infantry was not so much enemy fire as it as the large number of Iraqi soldiers surrendering to the troops of the battalion. By darkness of the 24th, the Rangers had not only conducted a major breach into the Iraqi defensive zone, they had also penetrated 30 kilometers to Phase Line Colorado and captured some 600 enemy troops. The following morning, the 2nd Battalion pushed on with the 2nd Brigade and quickly battled through the Iraqi 48th Infantry Division capturing its commander and destroying its command post. By the end of that day, the brigade had cut through and destroyed the Iraqi 25th Division as well and had reached Phase Line Utah where it took up a temporary defensive position. 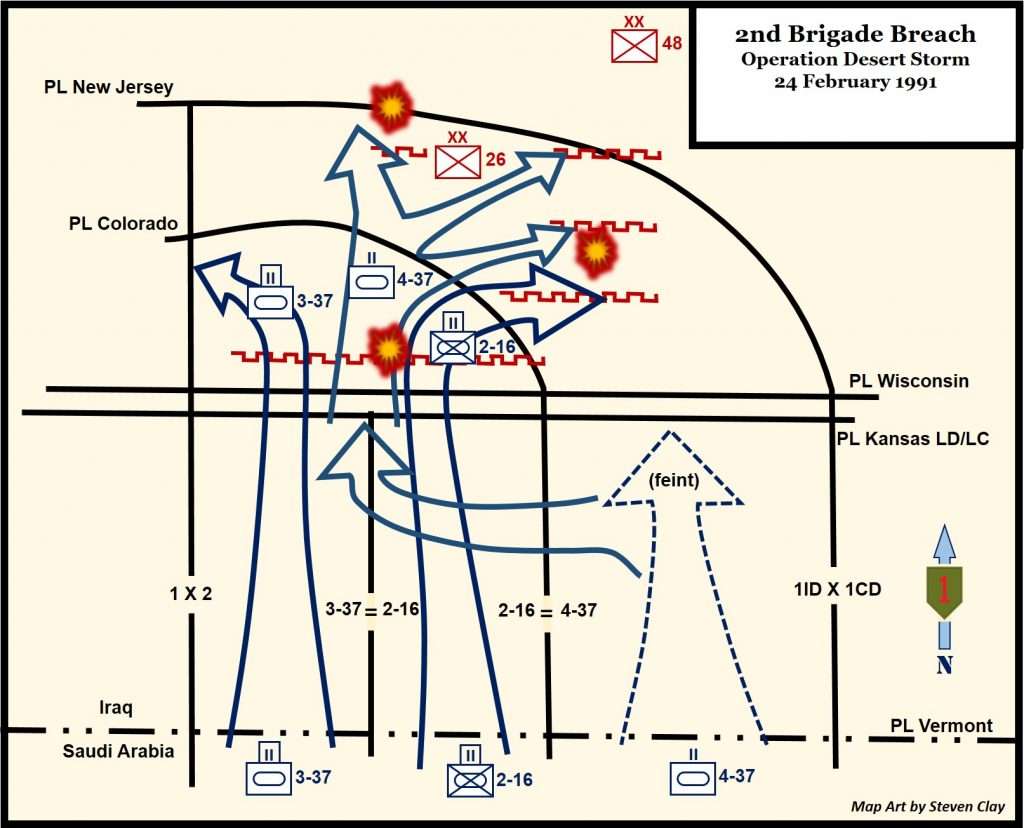