By the third week of March 1967, the new II Field Force commander, Lt. Gen. Bruce Palmer, Jr. (who had commanded the 16th Infantry Regiment in 1954-55) had determined that the S&D efforts in the southeastern area of War Zone C were futile and was on the verge of abandoning them when new intelligence indicated that the 271st Regiment was moving toward Katum. The VC unit was traveling so fast that it dodged the 196th Infantry Brigade’s effort to intercept it, and continued eastward to attack FSB CHARLIE at Sroc Con Trang.

Meanwhile, Col. James A. Grimsley, Jr., commanding the 2nd Brigade, also sought to bring the 271st to battle. On 30 March, he sent the Blue Spaders of the 1st Battalion, 26th Infantry, commanded by Lt. Col. Alexander Haig, into LZ GEORGE in an effort to locate the elusive prey. LZ GEORGE was a dried-up swamp located about two kilometers west of the hamlet of Ap Gu and one kilometer north of Route 246. The area was relatively open, tall grass, and surrounded by jungle. On arrival, Haig had his men cloverleaf around the area but made no contact. The battalion dug in along a 360 degree NDP on the LZ that night.

The following day, the 1-26 conducted sweeps in all directions from the LZ. Probing about 800 meters north of GEORGE, the recon platoon ran into the 2nd Battalion, 70th Guards Regiment. Company B moved to help the beleaguered scouts but was also pinned down. Haig soon had a full-blown firefight on his hands, but he was finally able to disengage about 1700 and returned all elements to LZ GEORGE. There, his battalion reoccupied fighting positions they had previously prepared and waited for reinforcements. The reinforcements came in the way of the 1st Battalion, 16th Infantry .

On loan to Grimsley from the 3rd Brigade, the Rangers came into LZ GEORGE about 1500 that afternoon against a VC force overwatching the LZ. After an aggressive sweep and a short, but fierce, firefight, the Rangers drove the enemy force off, then prepared a 360-degree defensive perimeter just to the northwest of 1-26’s original NDP. That evening, both battalions were in strong defensive positions using the newly developed “Dupuy Bunker” that is now the standard fighting position of the US Army.

After detecting the Blue Spaders’” presence, COSVN redirected the 271st Regiment to attack LZ GEORGE in coordination with the 70th Guards. About 0500 on 31 March, enemy mortar gunners began firing registration rounds in preparation for a major attack. By 0515, over 500 60-mm, 82-mm, and 120-mm mortar rounds had had fell in the areas of both battalions but no one was killed, thanks to the new bunkers. Immediately on the heels of the barrage came the ground attack, the 271st hitting the Blue Spaders and the 70th Guards assaulting the Rangers.

Within minutes, Haig’s line had been penetrated by the VC main attack in the C Company sector. Soon, the enemy was entering bunkers in the B Company sector as well, but the troops broke the attack, then assisted C Company and the recon platoon to form a new line. Meanwhile, the troops of 1-16 IN to the northwest successfully held the 70th Guards at bay. The Rangers deadly fire cut down dozens of VC assault troops as they attempted to hit the battalion perimeter and flank the 1-26’s position.

At first light, the Air Force joined the fight with CBU munitions. The air strikes, coupled with artillery support from FSB THRUST to the southeast, pounded the enemy formations. Soon helicopter gunships joined in, and the VC began to break contact. By 0800, the attack was broken. The Rangers were soon out of their holes and joined the newly arrived 1st Battalion, 2nd Infantry, in what turned out to be an unproductive pursuit of the battered VC units. A subsequent sweep of the battalion defensive perimeters revealed 609 dead VC. This was accomplished at a total cost of seventeen KIA from the two US battalions. Ap Gu was the biggest single victory of Operation JUNCTION CITY. The Battle of Ap Gu also proved to be the last significant contact for any units involved in the operation and by mid-April all 1st Division units had returned to their respective base camps. 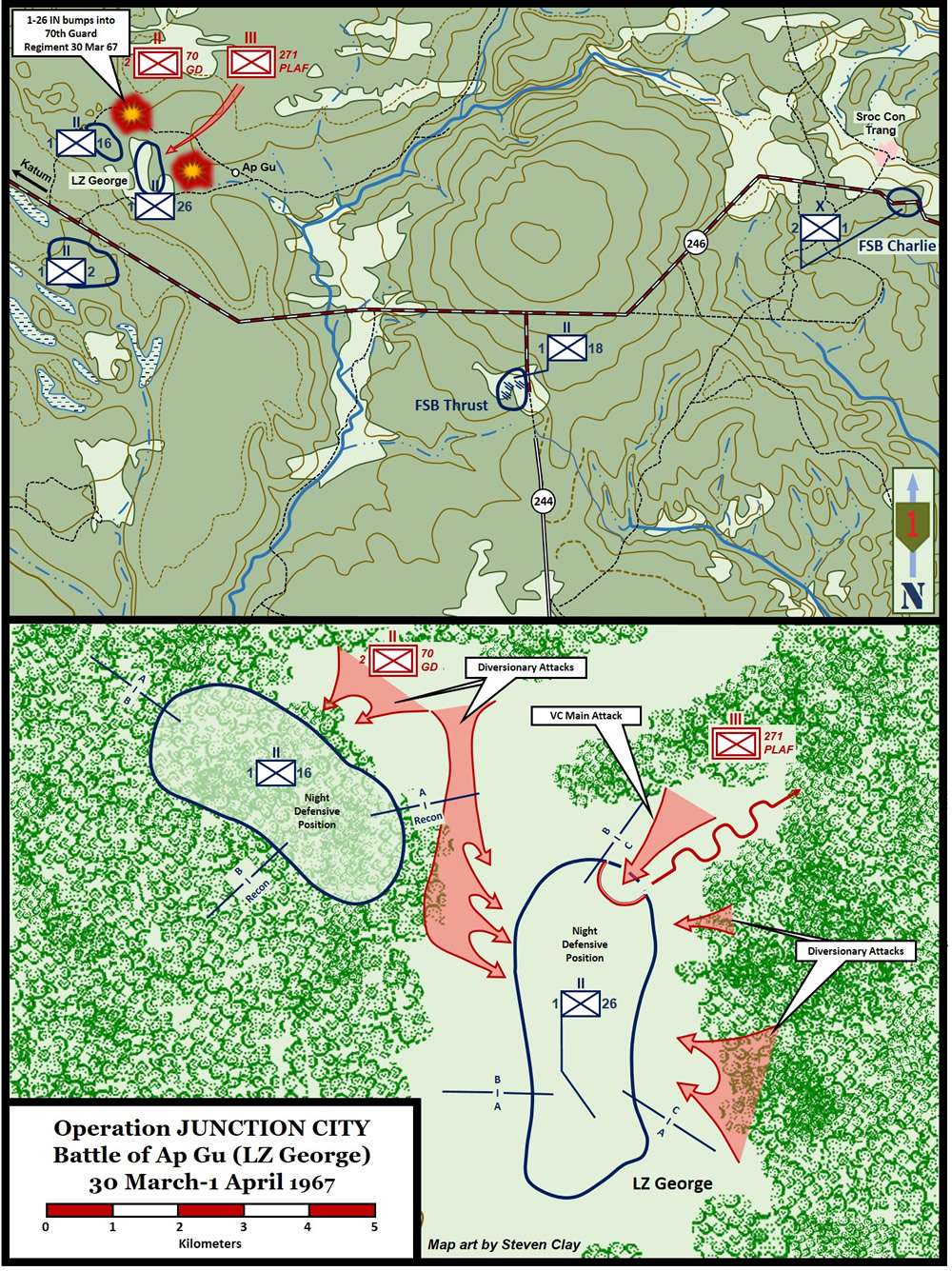