On 11 April 1966, Company C, 2nd Battalion, 16th Infantry, was operating 7 kilometers east of the village of Xã Cam My, near Courtenay Rubber Plantation in South Vietnam. The company was participating in Operation ABILENE, a 1st Infantry Division effort designed to bring elusive VC units to battle. At about 0730, the company moved out in search of the D800 Battalion, a well-trained VC Main Force unit. Beginning about 1100, the company made several successive contacts, but no firm firefights developed.

About 1355, a VC force estimated at platoon strength opened fire and wounded two men. The company commander stopped the company to evacuate the men. Unknowingly, however, the company had almost stumbled into the D800 Battalion’s base camp which was only 150 yards away. As medics tried to medevac the two casualties on jungle penetrators via helicopter, the D800 Battalion quickly and quietly surrounded the company. Unfortunately, the company did not form a tight perimeter before the enemy attacked and the initial defense was disjointed. Located forward of the company, the isolated 3rd Platoon called for artillery to break up an enemy force massing to their front. The initial shells landed right on target, but on the second salvo, the shells landed in the platoon area, killing or wounding a number of men. When the platoon called off the fires, the VC used the lull to move in even closer to pick off the Americans by small arms fire.

The company was now in a trap and the commander attempted to pull back, but soon found he was unable to due to the number of soldiers already dead and wounded. When the other platoons attempted to move into a tighter perimeter they were driven to the ground by intense small arms fire as well. About 1540, Air Force rescue teams came in to evacuate the dead and the wounded, and miraculously, they were able to rescue twelve men during the conduct of the fighting. When the situation became too hot and the Air Force choppers were forced to leave, one of the rescue team members, A1C William H. Pitsenbarger, remained with Charlie Company. Pitsenbarger’s efforts to save lives that day resulted in him receiving the Medal of Honor, but also resulted in his own death.

The terrific firefight continued throughout the afternoon and into the evening. There were several breakout attempts, but all failed. One by one the company’s leaders became casualties including the company commander and XO, both wounded. All the platoon leaders and platoon sergeants were eventually killed or wounded as well. By 1745, the VC had emplaced up to ten machine guns around the perimeter, including at least two .51 caliber MGs, to rake the company. Friendly artillery fire was brought in as close to the perimeter as possible while B Company, the nearest unit at two kilometers away, struggled through the thick foliage trying to reach their fellow Rangers. Throughout the afternoon, Sergeant James W. Robinson of Annandale, Virginia, was fighting with the heart of a tiger. After he bandaging his own wounds, Robinson knocked out a .51 caliber machine gun that had caused much damage. But in doing so, he fell dead from two .50-caliber hits in the chest. For his indomitable courage that day, Robinson earned the regiment’s tenth Medal of Honor.

As darkness enveloped the battlefield, small arms fire slackened but did not cease. The supporting artillery battery back at Xuyên Môc was able to keep dropping HE (high explosive) rounds very close to the perimeter and flares above the position as well. After midnight, C Company survivors noticed the VC fire go slack in the dark. In the perimeter, men scrambled to help their wounded buddies, redistribute weapons and ammo, and plug holes in the line. The badly wounded were dragged to the center of the position but those wounded troops who could still fire stayed on the line, determined to resist to the last if necessary. For the next three hours the area remained quiet.

Hopes soared as streaks of light to the east announced the dawn of 12 April. At about 0715, the troops of B Company made contact with the remnants of C Company. Soon after, helicopters arrived with massive assistance. First in were the engineers who started clearing an LZ to get the casualties out, followed by medics, who went right to work patching up the wounded while they waited to be evacuated. The Charlie Rangers had held on and handed the D800 Battalion a defeat. The VC suffered 41 known KIA by known body count and an unknown number of others killed or wounded (some estimates ran as high as 150 KIA, but that is likely too high). The enemy had also failed to overrun and destroy C Company which was clearly the enemy commander’s intent, although C Company did suffer 35 killed and 71 wounded of the 134 soldiers who entered the fight. For their actions on 11–12 April 1966, C Company was later awarded the Valorous Unit Award by the Secretary of the Army on 23 April 1968. 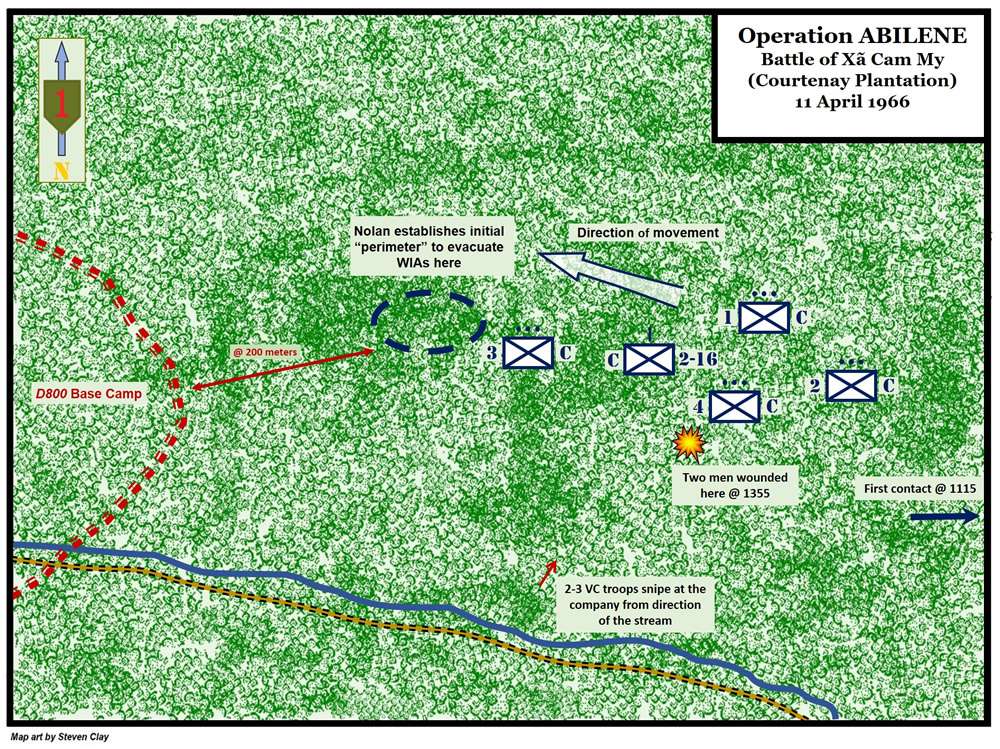 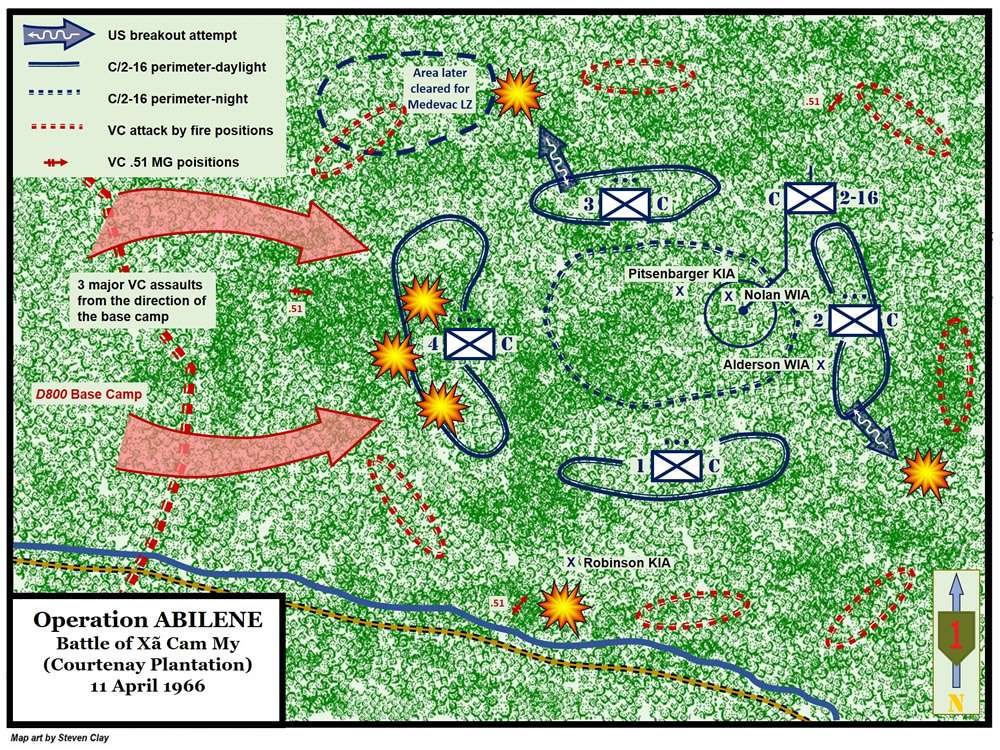