Intelligence planners at MACV believed that the Central Office of South Vietnam (COSVN), the controlling headquarters of all VC units in the III CTZ, was located in War Zone C. War Zone C was a large area that lay in the northwest reaches of Tay Ninh province adjacent to Cambodia. The major ground unit that COSVN controlled in that zone was the 9th PLAF Division. Since War Zone C was also the base of supply for most VC units in Tay Ninh province, the enemy could be expected to fiercely defend their meager resources. Therefore, General Dupuy, CG of the 1st Infantry Division in 1966, intended to conduct Operation BIRMINGHAM by sending all three of his brigades into War Zone C to destroy as much VC support infrastructure as possible and to find and destroy the COSVN headquarters.

For Operation BIRMINGHAM, the 2nd Battalion was placed under operational control (OPCON) of the 1st Brigade for the first time since its arrival in Vietnam. On 24 April, the 2nd Battalion entered AO BUICK at LZ RED about twenty kilometers northwest of Tay Ninh. For two days, the battalion remained at the LZ as the brigade reserve, then on 26 April it conducted a relief in place with another 1st Brigade battalion. For the next four days, the battalion worked in conjunction with the 1st Battalion, 2nd Infantry, performing S&D sweeps northward along the Beng Go River along the Cambodian border. The sweeps were largely unproductive but on 29 April the Rangers discovered 108 tons of rice and a large field hospital complex along the banks of the Beng Go River.

On 30 April, B Company began the destruction of the VC hospital, while the rest of the 2nd Rangers moved north past the village of Lo Go with the 1-2 Infantry. About 0845, both battalions came under automatic weapons fire from the Cambodian side of the river. Apparently, a VC unit was in the process of crossing the Beng Go River when the battalions arrived in the area. The 1-2 Infantry deployed in the direction of the river engaged. Soon the heavy return fire from the two US battalions caused the enemy guns to temporarily fall silent. The VC commander used the lull to attempt an encirclement of the 1-2 Infantry which soon became decisively engaged and partially surrounded.

The VC pinned down parts of the 1-2 Infantry from support positions across the river and moved a maneuver force to flank the Americans from a tree line to the northeast. The 2-16 commander, LTC William Hathaway directed his A Company to relieve the pressure on the 1-2 Infantry. The company moved north and soon spotted the VC force in a tree line to the northeast that was now attempting to surround the 1-2 Infantry. One platoon attacked and penetrated the VC line, while the rest of A Company rolled up the enemy’s left flank. In their desperate efforts to escape, the VC soldiers set fire to the grass to slow the American advance. A Company killed eight enemy troops in this engagement and soon stumbled upon a company base camp that it promptly destroyed.

The rout of the VC force to the northeast allowed the 1-2 Infantry to now focus their attention solely on their assailants across the river and they returned a heavy volume of fire. Assaulting toward the river bank, the battalion killed forty-two VC on the east side of the river, and killed probably another seventy-five on the west side. The enemy bodies could be seen heaped up on the banks and on the far side of the stream by the infantry as well as chopper pilots flying over the area. Meanwhile, Hathaway’s troops mopped up to the north and accounted for another four enemy in sporadic contacts in that direction. Others were killed as they attempted to swim to safety into Cambodia, but their bodies were swept down river.

After a five-hour battle, the two battalions succeeded in handing the enemy a severe defeat. The American units accounted for 54 confirmed VC KIA and upwards of 100 more dead that could either be seen laying on the Cambodian side of the Beng Go or identified from aerial photographs. These dead were later identified as belonging to the 3rd Battalion, 70th Security Guards Regiment, the security and area control unit for the COSVN headquarters. The 1st Infantry Division intelligence officers were surprised that a single VC battalion would stand and fight so hard while outnumbered against two American battalions. Thus, they theorized that the 70th Security Guards Regiment was probably sent to engage and delay the Americans while other units evacuated equipment and supplies from the COSVN headquarters itself into the safehaven of Cambodia. The Battle of Lo Go was the largest single engagement during BIRMINGHAM. 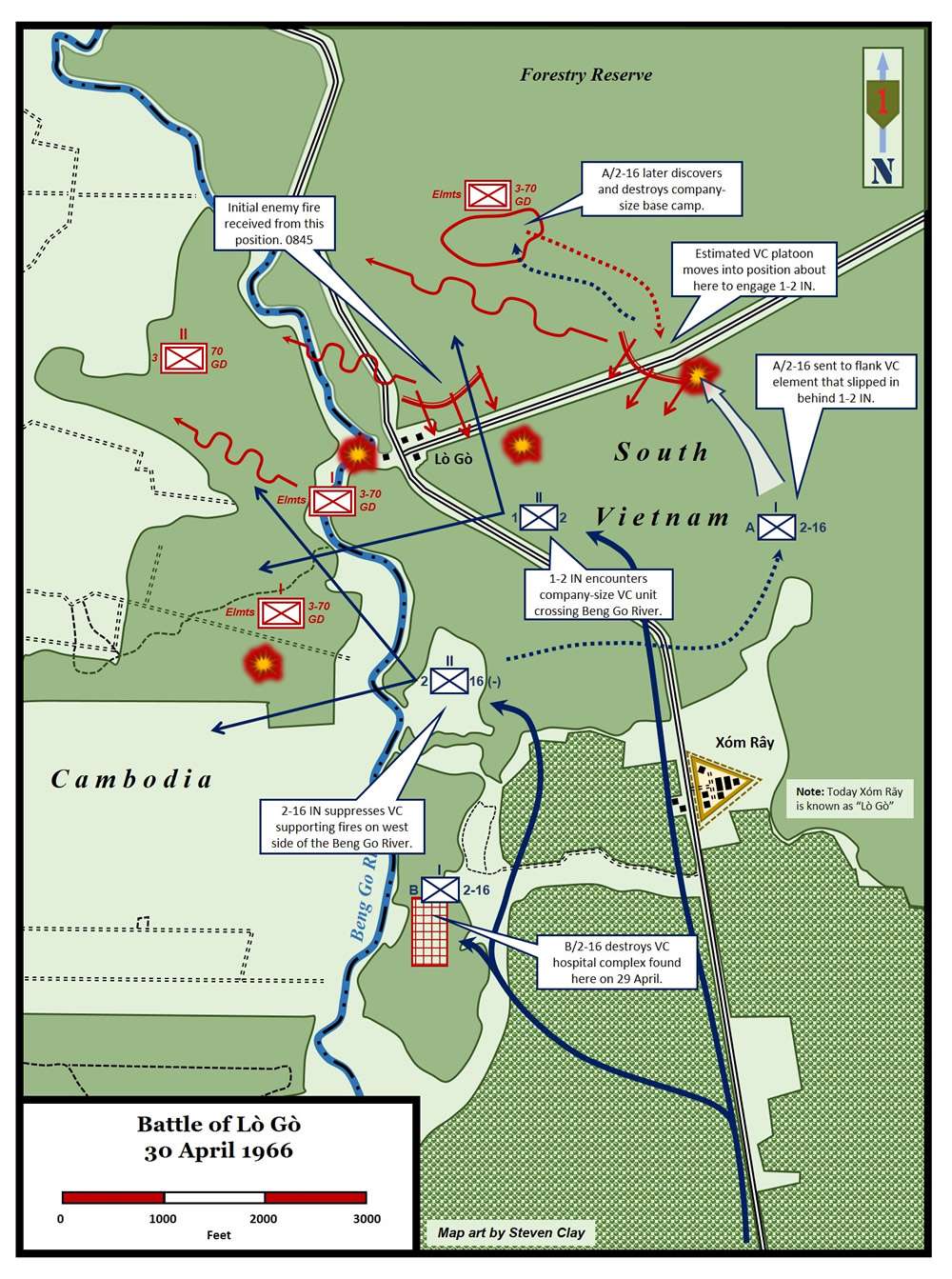