The 3rd Brigade, 1st Infantry Division began Operation COCOA BEACH 3 March 1966. The intent was to draw the 272nd PLAF Regiment into battle. For this operation, Col. Brodbeck positioned two infantry battalions (2-28 and 1-2) about six miles north of Lai Khe along the west side of Highway 13 to search for the VC unit. He kept 1-16 Infantry back at Lai Khe as the Ready Reaction Force (RRF). That day, the 2-28 Infantry moved into a position in the Lo Ke Rubber Plantation, located about one mile west of Bau Bang, where it prepared a strong defensive perimeter. The troops dug well-placed fighting positions, expecting a heavy attack. The following day, the battalion sent out S&D patrols to make contact and destroy whatever enemy troops and supplies could be found. There was no contact, but that night, the battalion received intelligence from the 3rd Brigade S2 that a regimental-size force was nearing Bau Bang, and the battalion went into full alert.

Early on the dark morning hours of 5 March, an ambush patrol, led by 2nd Lt. Robert J. Hibbs, made first contact with an enemy company and inflicted heavy casualties on them. Hibbs then ordered his men back to the perimeter, but en route, the patrol ran into another enemy company preparing to assault the battalion’s battle position. The troops fought their way through, but Hibbs was killed while covering the retrograde movement. About 0635, the main attack commenced on the 2-28’s perimeter, with a battalion-sized force attacking on each side. Several attacks were sustained over the next three hours until 0930, when the next major push came against the southern perimeter.

The situation had become serious, so Brodbeck ordered the Rangers to the rescue. Within sixteen minutes of receiving the order, A Company was in the air, winging its way to a LZ northeast of the Black Lions’ position. Knight’s troops secured the LZ and the remainder of the battalion arrived in seven additional lifts. By 1055, the Rangers were sweeping southwest toward the 2-28’s position. Almost immediately, C Company engaged about thirty VC attempting to make their way out of the area. The fighting was brief and the company sustained one WIA. For the next several hours, each company made numerous sporadic, but sharp, contacts with enemy remnants as the VC attempted to escape to the north. In all, the battalion killed forty-five VC and located the bodies of another twenty, probably killed by air strikes or artillery. The Rangers also accounted for another ten known WIAs and secured three POWs. Remarkably, no additional casualties were sustained by the 1st Battalion. About 1530, 1-16 entered the 2-28 Infantry’s perimeter and broadened the existing position. For the next twenty-four hours, the battalion conducted recon patrols around the position, counting bodies, gathering intelligence, and destroying abandoned enemy equipment. At 1700, 7 March, Operation COCOA BEACH was terminated, and units returned to Lai Khe. The 272nd Regiment and D-61 South Ben Cat Company suffered a total of 199 KIA from various means during the four-day operation. 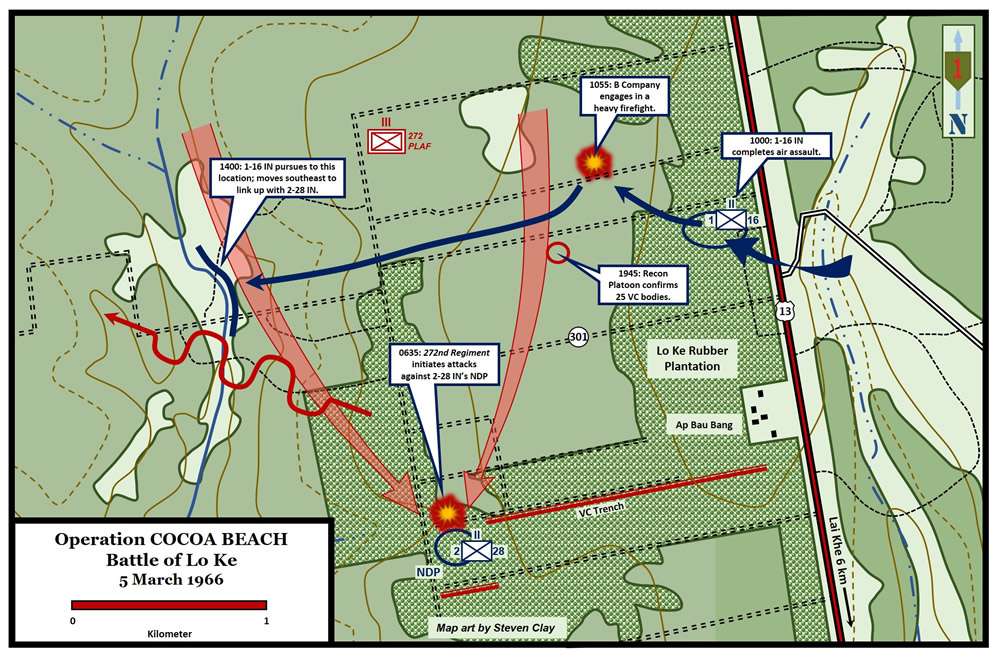