By August 1968, the 7th PAVN Division in the north had recovered enough from its Tet casualties to resume operations in War Zone D. Various indicators that month had revealed increased NVA activity in the areas north and east of Loc Ninh, and minor enemy scrapes with ARVN and US units sweeping the area revealed the presence of the 141st and 165th Regiments setting up base camps and moving in supplies. In September, MG Keith Ware, CG of the 1st Infantry Division, determined to send the 1st Brigade into War Zone D to find and engage the 7th Division. It was during the initial stages of this operation that the 1-2 Infantry made contact with the 141st Regiment on 11 September near Loc Ninh.

At the time of initial contact, the 2nd Battalion, 16th Infantry was occupying semi-permanent NDPs and FSBs while engaged in pacification efforts in the vicinity of “Claymore Corners,” well east of Lai Khe. The battalion received a warning order about midnight on 12 September to be prepared to move to Loc Ninh the next morning. The mission called for the 2nd Battalion to insert into blocking positions north of the fighting on Hill 222 north of Loc Ninh to catch any NVA units trying to exfiltrate north back into Cambodia.

Before noon 13 September, the battalion, less C Company and part of D Company, was consolidated at Loc Ninh airfield where it boarded C-130s for an air assault operation. About 1245, the bobtailed battalion was airlanded by the C-130s on a strip of Highway 13, just few kilometers northwest of Hill 222. Moving off the LZ, the battalion deployed directly into a rubber plantation and moved southeast toward the planned blocking positions. This was no easy task since the battalion had been moved so fast that it had not been provided maps of the AO.

Arriving at the assigned location, the battalion commander, LTC Charles P. McLean, ordered the Rangers into three generally linear blocking positions about 1100 meter-long. While the units were deploying, an NVA force estimated at 150 men attacked troops of the recon platoon which was operating with D Company. After a sharp firefight, the enemy was repulsed and broke contact. Sometime later, B Company was also hit from behind and for a time it appeared that the enemy was trying to surround the unit. Later events indicated the effort was merely a feint by the enemy unit to avoid decisive contact so it could retire to the northwest and the safety of the Cambodian border.

While the battalion was busy digging in, McLean sent patrols forward to determine what was to his front. The sweeps revealed twenty dead NVA soldiers, several weapons, and blood pools left by enemy wounded. That night, forward of A Company, troops observed bobbing lights in the distance while peering through the light evening rain. The lights turned out to be the torches, flashlights, and candles of NVA troops searching for their wounded and dead. A call to the nearest FSB brought artillery crashing into the vicinity and, not surprisingly, the lights disappeared.

The next morning, McLean was holding a meeting with his commanders, when he received a call from the recon platoon leader that 150 “friendly” troops were moving toward his location. It soon developed that this was actually a forward security unit leading casualty parties north to Cambodia. The NVA unit seized the initiative and struck the center of the battalion position, then sent flanking elements to both sides of the blocking position attempting to surround the battalion. When they realized that the 2-16 was too big for them to handle, the flanking elements broke contact and fled north. The fixing unit in front of the Rangers was pinned down, however. One cluster of about sixty troops hustled into a small clump of trees which soon erupted in blinding flashes from the impact of 8-inch rounds. McLean estimated that twenty to forty NVA troops were killed in that incident.

Soon after this contact, McLean was directed to move south and link up with the 1-28 Infantry. Company A took up the lead, but soon encountered an NVA platoon emerging from the rubber trees into the open. The company line erupted in automatic fire, killing eleven of the enemy in seconds. The rest of the enemy platoon fled into the rubber trees followed by A Company for about 400 meters. During the pursuit, the Rangers killed several more NVA, recovered numerous discarded weapons, and captured the platoon leader and one squad leader.

After this action, McLean pushed the battalion south through the rubber plantation toward the link-up point some 1,200 meters away. Just as B Company, now in the lead, arrived at the agreed location in the early evening, the point man spotted an enemy force of about fourteen men moving through rubber trees and high grass on a route diagonal to the main body of Rangers. In the fading light, McLean brought up D Company on the flank of the NVA unit. From about forty yards away, the company opened fire. A lively engagement ensued and continued into the enveloping darkness. The firing eventually ceased, and the battalion pulled into a defensive perimeter to wait for morning.

The light of dawn on 15 September revealed that the battalion had entered an enemy base camp. A subsequent search located several bodies, along with more blood pools, cooking utensils, and much personal equipment and supplies. The disposition of the captured materials indicated that the enemy had been surprised and had fled in great haste.

For some reason, the 1-28 Infantry had not moved to the link-up site, so McLean continued moving south and contacted the Black Lions about noon. On link-up, the 1st Brigade sent both battalions on a seventeen kilometer RIF toward Cambodia to sweep up scattered remnants of the 141st Regiment. The following afternoon, McLean’s men were flown home to Di An for the first time in seven months. 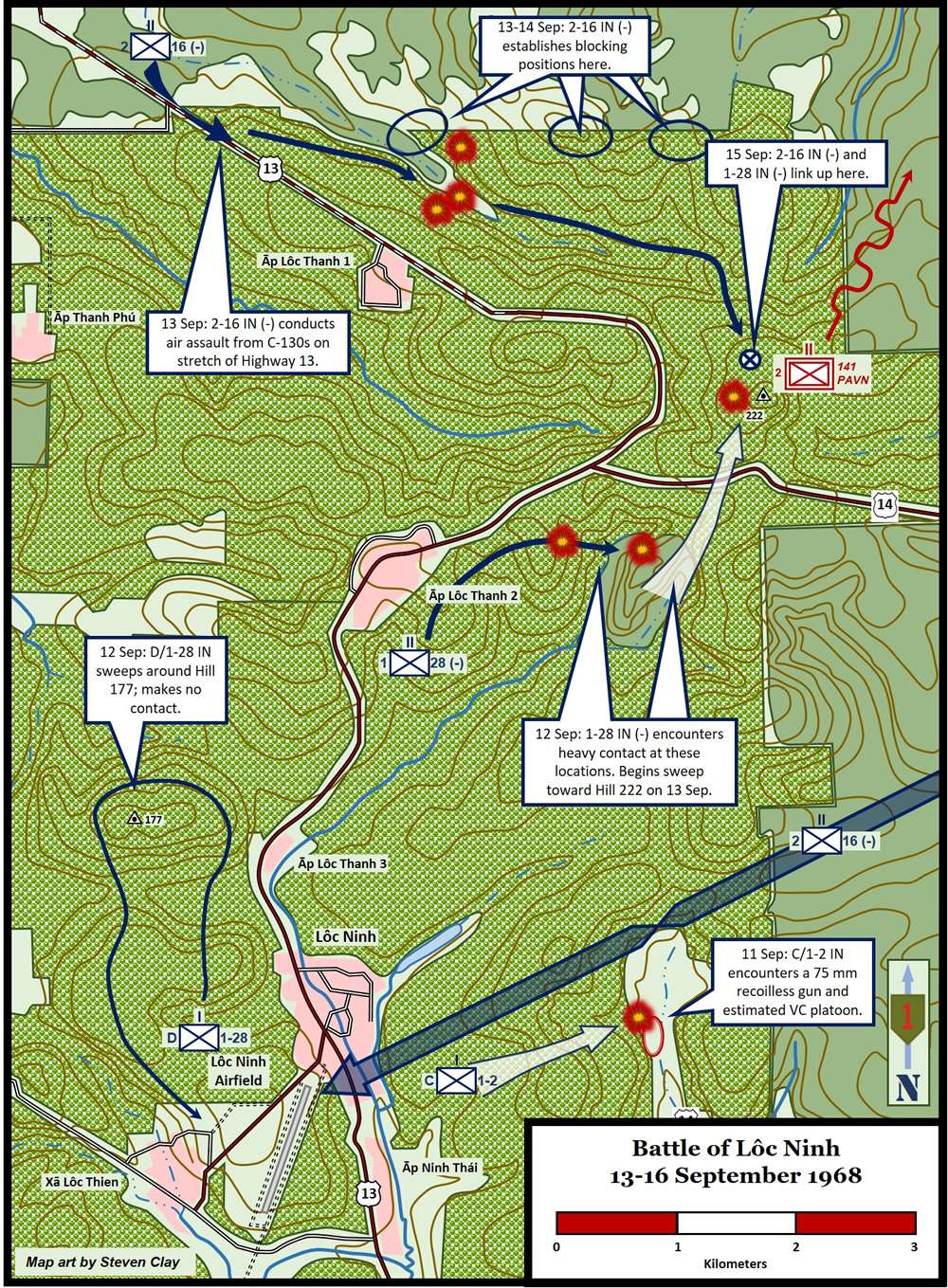