The Battle of Minh Thanh Road, which took place on 9 July 1966, started with a deliberate deception effort to trap an entire VC regiment. It worked beautifully. Maj. Gen. William Dupuy, CG of the 1st ID, directed Col. Sidney B. Berry, Jr., commander of the 1st Brigade, to develop a plan to achieve the objective. Knowing of the VC’s affinity for gaining early intelligence, Berry “leaked” the information that a supply convoy would move down the Minh Thanh road from Highway 13 to Minh Thanh at a given time. As anticipated, the commander of the 272nd PLAF Regiment received the information and moved to ambush the convoy. Little did he know that the “convoy” was going to be the heavily armored tanks and tracks of the 1-4 Cavalry, and the “supplies” were going to be heavy volumes of American ammunition. Thus, LTC Rufus Lazzell’s 1st Battalion, 16th Infantry was attached to the 1st Brigade to help trap the 272nd.

On the 8th, the battalion moved to Quon Loi to position itself for the operation. The following morning, the vehicles of the Quarterhorse moved out of An Loc, en route for Minh Thanh. About 1100, two troops of the squadron had advanced to a point about halfway between check points TOM and DICK when they received heavy automatic and recoilless weapons fire. The VC had employed two battalions in a 1,000-meter-long ambush. As the Quarterhorse fixed the VC in position, Berry moved four infantry battalions into position to ambush the ambushers. The 1st Battalion, 18th Infantry, moved northeastward from Minh Thanh to block the 272nd’s right flank. Concurrently, the 1st Battalion, 28th Infantry, flew into an LZ on the left flank. These two battalions blocked in the regiment.

About noon, the 2nd Battalion, 2nd Infantry moved up behind the cavalry to reinforce them. At 1326, Lazzell’s men began their air assault into LZ “NC” behind the VC ambush site to close the trap. Within an hour, the Rangers were on the ground. By this time, however, the VC commander must have suspected the danger, for his troops had broken contact and started moving northwest. Berry directed Lazzell to cut in behind the fleeing enemy by moving on foot to LZ “N5.” The movement through the jungle was excruciatingly slow due to the thickness of the foliage, but here and there, the battalion contacted small groups of VC desperately attempting to escape the sack. As C Company led the battalion through dense bamboo thickets, it encountered an occupied base camp. The point man signaled to the platoon leader that he heard voices and the company moved to get on line in order to attack, but the VC opened fire first. The lead platoon was quickly pinned down and things started to get worse. While the company commander brought up the rest of his company to provide a base of fire, Lazzell also moved toward the action to control the battle.

Closing in on C Company’s position, Lazzell was struck in the left elbow by a .51-caliber round and had to be evacuated. Captain Ed Yaugo, the battalion S3, took command. Yaugo directed C Company to pull back as he called for air support. Soon, the fighter-bombers were on station blasting the base camp and silencing the resistance. The Rangers then advanced into the camp, destroyed its contents, and continued to move to its final objective. By the time the battalion reached LZ N5 about 1700, the rest of the ambush zone had already been swept by the 1-28 Infantry. The ambush was over. Before dark, Lt. Col. George M. Wallace arrived to replace Lazzell in command of the 1st Battalion. Over the next two days, the 1st Brigade units conducted sweeps to harass and pursue the decimated VC regiment and by the time the battle officially ended, the 272nd had lost almost 300 KIA. 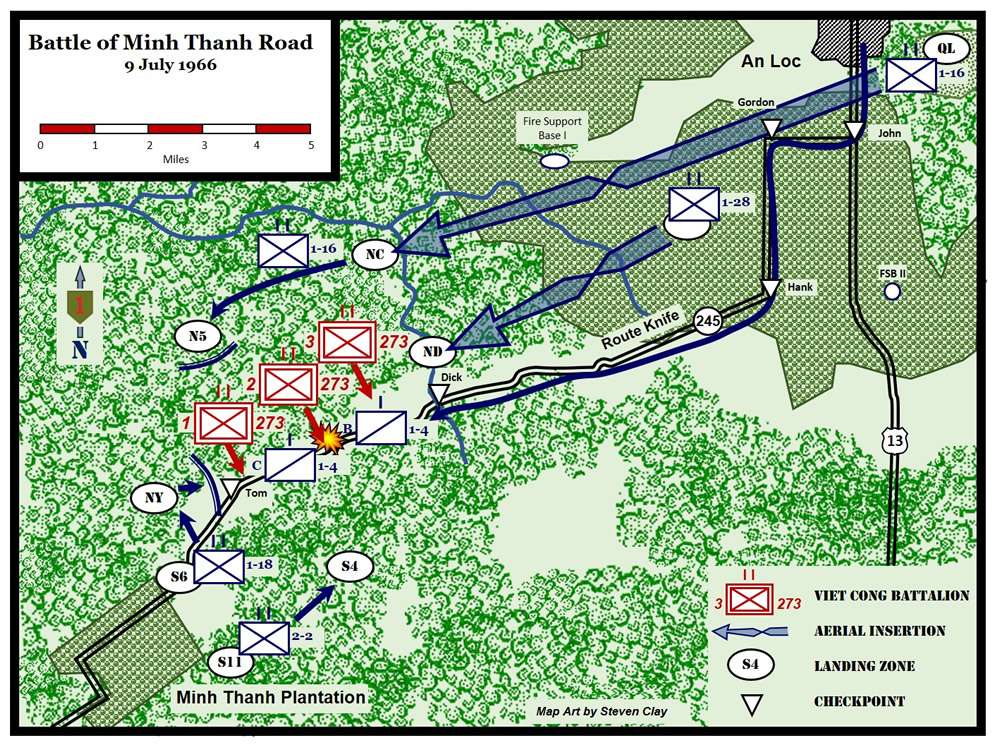