Operation BILLINGS was planned and conducted by the 1st Infantry Division to destroy elements of the 9th PLAF Division which appeared to have moved back into a suspected base camp areas north of Phuoc Vinh. The operation called for two brigades to conduct S&D missions north of the Phuoc Vinh Base Camp. On 12 June, three battalions, under 1st Brigade control, inserted into two LZs about seven to ten kilometers north of the city. Concurrently, the 3rd Brigade inserted the 2nd Battalion, 28th Infantry, Black Lions, into a LZ at Chi Linh to secure a FSB there. The following day, the 1-16 IN inserted into LZ RUFE, seventeen kilometers due north of Phuoc Vinh. Later that day, the 2-28 Infantry moved from Chi Linh into LZ RUFE as well. The two battalions secured the area around RUFE and dug in for the night.

On the morning of 14 June, B and C Companies of 1-16 IN moved out to the west of RUFE to seek out the enemy. Just after noon, troops from C Company spotted five VC soldiers about two kilometers southwest of the LZ, but was not able to engage them. Two hours later, B Company received sporadic small arms fire about one kilometer north of C Company. The firing was brief, then tapered off, seeming to indicate that the enemy had broken contact. Fifteen minutes later, however, B Company was struck in full force, in the front and flanks, by a VC battalion. The company commander frantically brought artillery and air strikes to bear, as the battalion commander, LTC Lazzell, ordered C Company to move to B Company’s aid. The fighting was desperate as B Company repulsed the VC assaults. By the time C Company arrived at the battle site about 1800, the B Company had beat back the VC attack but had suffered six killed and fifteen wounded. A search of the area before dark revealed sixty-two enemy dead.

The next two days of patrolling and sweeps were uneventful. Intelligence indicated that the 271st Regiment had moved toward a vast area of bamboo stands farther north. One location, designated LZ X-RAY on operations maps, looked like a good place to search for the evasive prey. Lazzell’s 1-16 was only about two kilometers south of that location so on the morning of 17 June, the battalion moved from RUFE toward LZ X-RAY. The 2-28 Infantry was to follow later but its A and B Companies traveled along with the 1-16. Concurrently, 1-16 IN’s C Company remained behind to come up with the 2-28 IN.

By noon, the 1st Rangers had arrived at the LZ and as the lead elements of the battalion entered the area, a number of troops noticed that there appeared to be many freshly dug pits and trenches as if the VC had previously prepared ambush positions in case the Americans tried to conduct an insertion there. The battalion formed a perimeter around the entire LZ to wait for the Black Lions to come up for the follow-on S&D mission. Just after the lead elements B Company, 2-28 IN began to take positions, Lazzell received reports of groups of VC troops moving toward the perimeter from the northwest. At about 1245, the enemy initially attacked into the positions held by the Black Lions’ B Company. The initial attacks against B Company, 2-28, were designed to fix that unit while other assault elements moved into position to attack elsewhere.

About 1300, fierce assaults were launched against A Company, 1-16 IN from the northeast. Soon pressed hard in the sectors held by A and B Companies, Lazzell called for heavy artillery concentrations and gunship support. The combined effects of the indirect fire and airpower successfully defeated those attacks. The victory was short-lived. The VC then attacked into the Rangers’ recon platoon from the southeast. The Rangers in that sector responded with a withering fire that killed scores of enemy troops, but this second attack succeeded in overrunning part of the Recon platoon’s line. Only a few of the scouts escaped to link up with other units on the flanks.

Initially, the contact appeared to be a chance encounter with VC local forces. Before long, however, the enemy effort took on the hallmarks of a well-planned and rehearsed ambush by a veteran force estimated to be at least two battalions. These troops were well-uniformed in khaki, wore steel helmets, and were equipped with the latest AK-47 assault rifles, which indicated they were main-force unit. It was later discovered that their attack routes had been carefully marked and they had moved quickly to try and engage the Rangers before the US troops were able to fully dig in. Post-battle analysis revealed that the unit was the 271st PLAF Regiment.

Soon, the situation grew serious and Ranger casualties mounted. For a time, it seemed that the enemy might break through to the center of the LZ, but air strikes by F-100 fighter-bombers had stabilized the situation by 1500. Due to the heavy concentrations of small arms fire and air support, the VC commander decided that he had had enough and began to break contact under the cover of a two-hour mortar barrage. About 1900, the division RRF arrived, but the battle was long over, and the Rangers had been bloodied. The battalion had lost twenty-six men killed and the Black Lions lost another eleven. An additional 150 men were wounded between the two battalions. The 271st Regiment had not gotten away unscathed, however. A search of the area immediately after the fight revealed seventy-two bodies and a sweep deeper into the AO the next day found twenty-six additional enemy KIA. 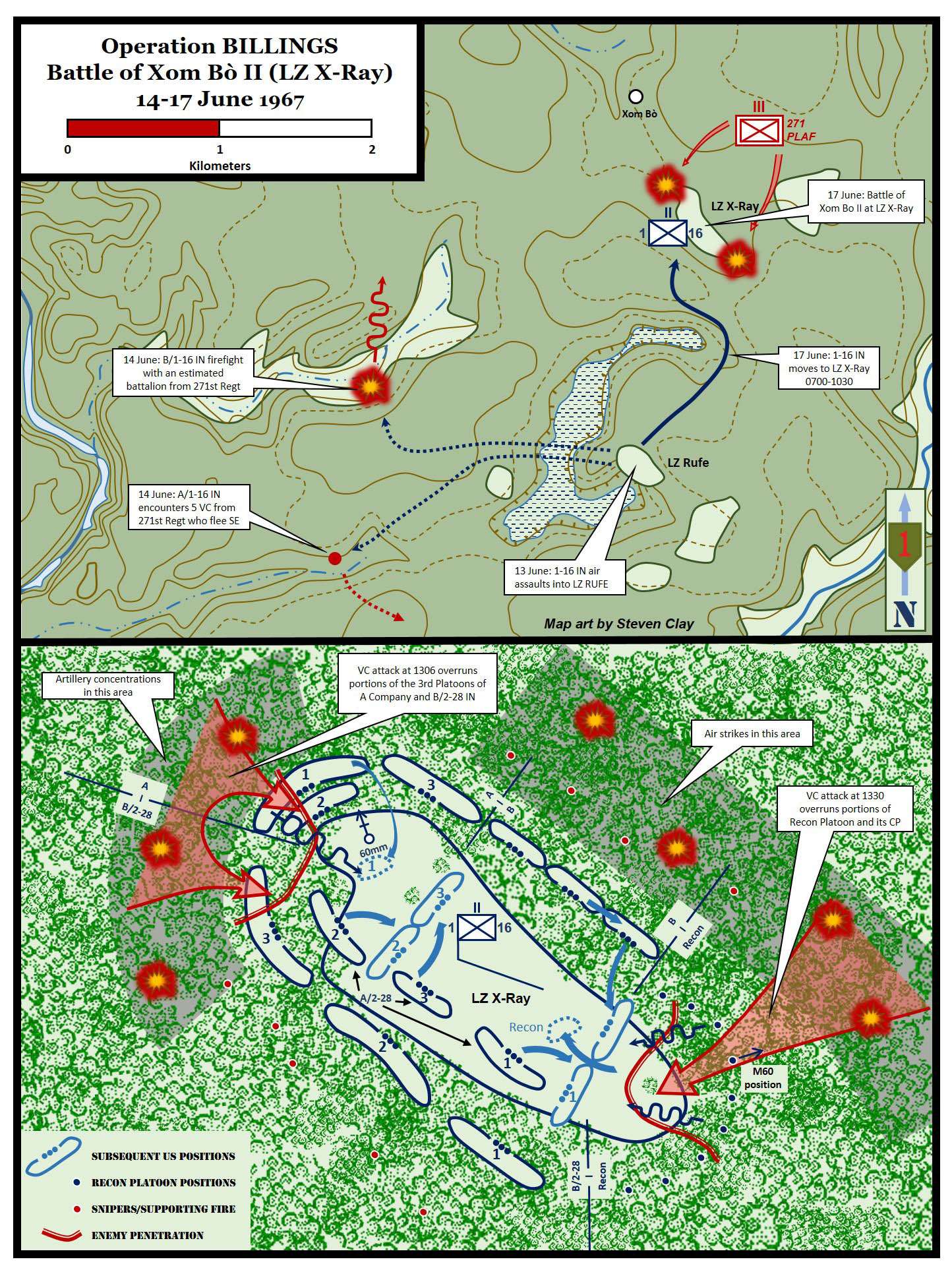