Since the 2nd Brigade’s arrival the previous June, most of the 1st Infantry Division’s large scale efforts had been largely focused to the northwest of Saigon. However, enemy activities were picking up in other parts of the III Corps Tactical Zone as well. In early 1966, intelligence efforts began to paint a picture of a build-up of supplies in areas to the east of Saigon to support the 5th PLAF Division. The supplies were reportedly being stockpiled to support a planned division-size offensive against the capital. In response to this build-up, Gen. Seaman ordered the II Field Force to develop plans for a large-scale ground operation in the suspected areas. The mission became known as Operation ABILENE.

ABILENE was designed to be a spoiling attack to destroy the supplies and base camp areas supporting the 5th Division’s attack. Additionally, during the operation, II Field Force engineers would clear a new supply route to ports om the South China Sea. The 1st Infantry Division’s mission during ABILENE was to find and destroy elements and base camps of the 5th and 94th (“Dong Nai”) Regiments of the 5th PLAF Division. The 3rd Brigade’s portion of that mission was to operate in AO OREGON located in the southern half of the 1st Division’s mission area. On 30 March, the brigade, including the 1st Battalion, 16th Infantry, was airlifted by C-130s from Lai Khe to the airfield at Vung Tau to stage for further operations.

The following day, the 1st Battalion was airlifted into LZ PENDLETON, four kilometers northeast of the Núi Dinh—Núi Bao Quon mountain complex. For the next two days, the battalion swept westward, just north of the twin mountains of Núi Toc Tiên and Núi Thi Vai, until it reached Highway 15, four kilometers south of Phú My. Enemy contact the sweeps was almost non-existent. The Rangers remained there until the battalion was airlifted to the brigade CP location southeast of Xuyên Môc on the 4th. For the next five days, the battalion remained at the brigade CP location pulling security for the 3rd Brigade’s Tactical Operations Center and the 2nd Battalion, 33rd Field Artillery. Each of the three line companies, however, performed independent airmobile insertions and sweeps at several locations in the eastern half of AO OREGON south of Xuyên Môc. The primary event of this period was B Company’s capture on 8 April of two VC tax collectors (with the help of one of the local farmers).

On 11 April, the battalion moved to LZ BUTTE and performed S&D sweeps near Núi Hôt for the next three days with minimal results. The only thing of note was the discovery and destruction of a VC base camp on 12 April. On 14 April, the 1st Rangers were airlifted back to Lai Khe after two weeks of almost fruitless searching. 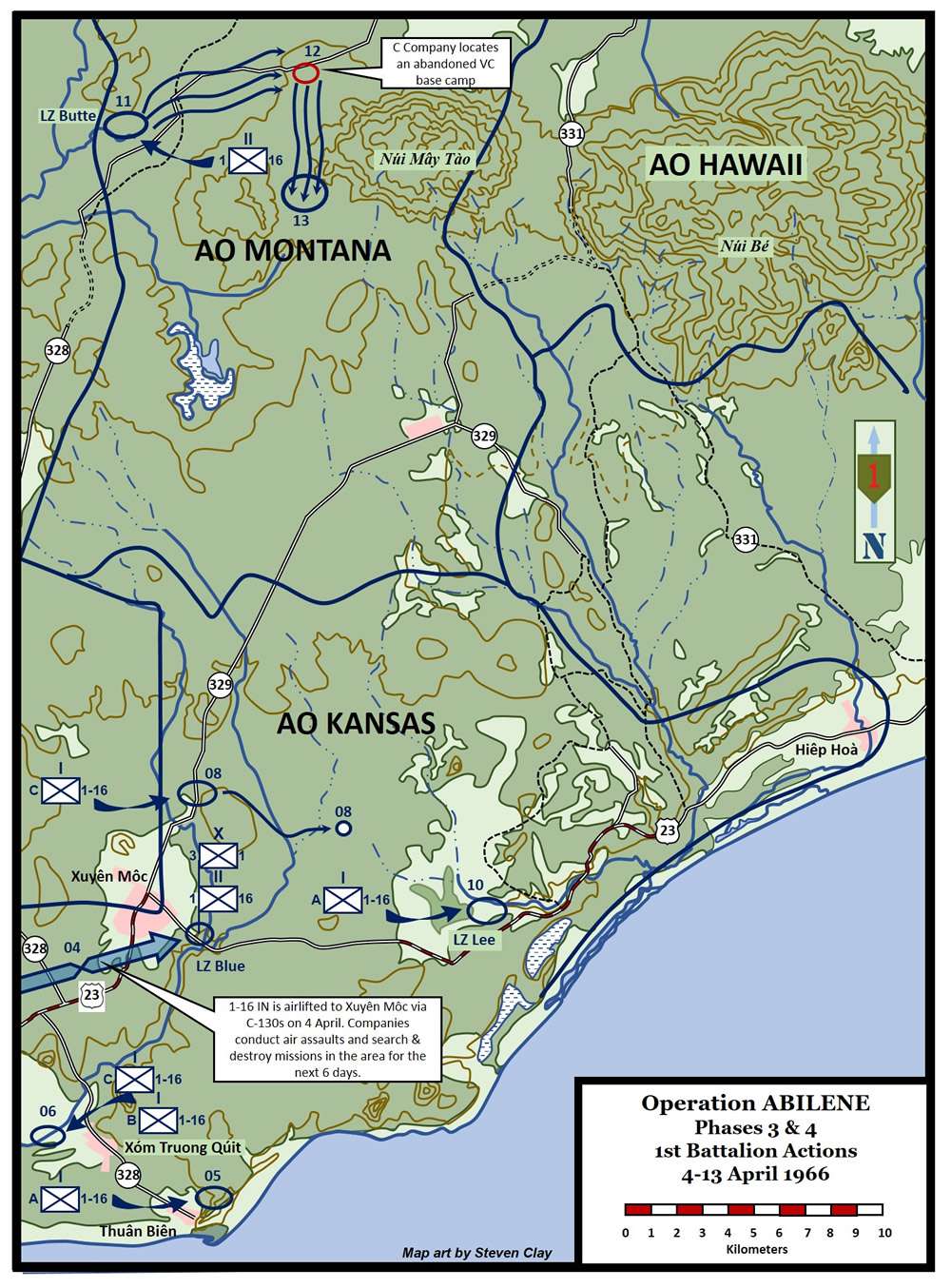