While the 1st Battalion’s efforts during ABILENE were largely barren of enemy contact, the troops of the 2nd Battalion would experience significantly more action, especially C Company. The 2nd Brigade’s mission was to conduct S&D operations in AO NEBRASKA, the northern half of the division’s mission area. On 30 March, the 2nd Battalion was airlifted into LZ NORMAN, ten kilometers west of Xã Cam My, where, as the brigade reserve, it performed security for the 2nd Brigade CP and the 1st Battalion, 7th Field Artillery. The two battalions of the 18th Infantry conducted S&D sweeps to the south over the next several days. On 2 April, the 2nd Battalion, 18th Infantry, assumed the reserve mission, and the 2nd Rangers were airlifted into the new 2nd Brigade AO located ten kilometers northwest of Xuyên Môc. From 3 to 6 April, the 2nd Battalion conducted sweep operations in that area. The first day, the battalion found and destroyed a base camp consisting of fifteen barracks. The following day, it captured and destroyed 350 tons of rice and ammunition. On 7 and 8 April, the Rangers moved to the Binh Ba area and conducted a village seal in coordination with ARVN troops and then moved to a battalion consolidated night defensive position (NDP).

Up through 8 April, intelligence information from the division G2 indicated that, “local force units presently operating in the area were scattered and disorganized with little capability to mount effective operations.” Indeed, the G2 had information that the two VC main force regiments that the Big Red One was looking for were not even in the province. However, there were also indications that one unit, the D800 Battalion, a unit subordinate to the 94th “Dong Nai” Regiment of the 5th PLAF Division was still somewhere in the AO. On 8 April, the 2nd Battalion received orders for another mission. The plan was for the battalion to move northwest toward Xa Cam My and Highway 2.in separate, but mutually supporting columns. If one company ran into the VC unit, it could fix it in place while another company to its right or left would move to that location and pile on. The companies would be about two kilometers apart so that they could arrive at the place of contact fairly quickly. What was not known at the time was how thick the jungle was in some regions of the AO. The battalion started movement on 9 April and each night established a new NDP each night. Contact with enemy forces was sporadic and very light until 11 April when C Company encountered the D800 Battalion. The VC battalion was still occupying its base camp which indicated that C Company may have caught them by surprise. Once C Company was decisively engaged, B Company was ordered north to pile on but discovered that they could not get there in a timely fashion due to the heavy foliage and the falling darkness of night (see next map for a description of C Company’s actions at the Battle of Xã Cam My). After a very sharp battle in which both sides suffered heavy casualties, the battalion continued the pursuit of the D800 Battalion until 13 April when A and B Companies reached Highway 2 and ABILENE was concluded. 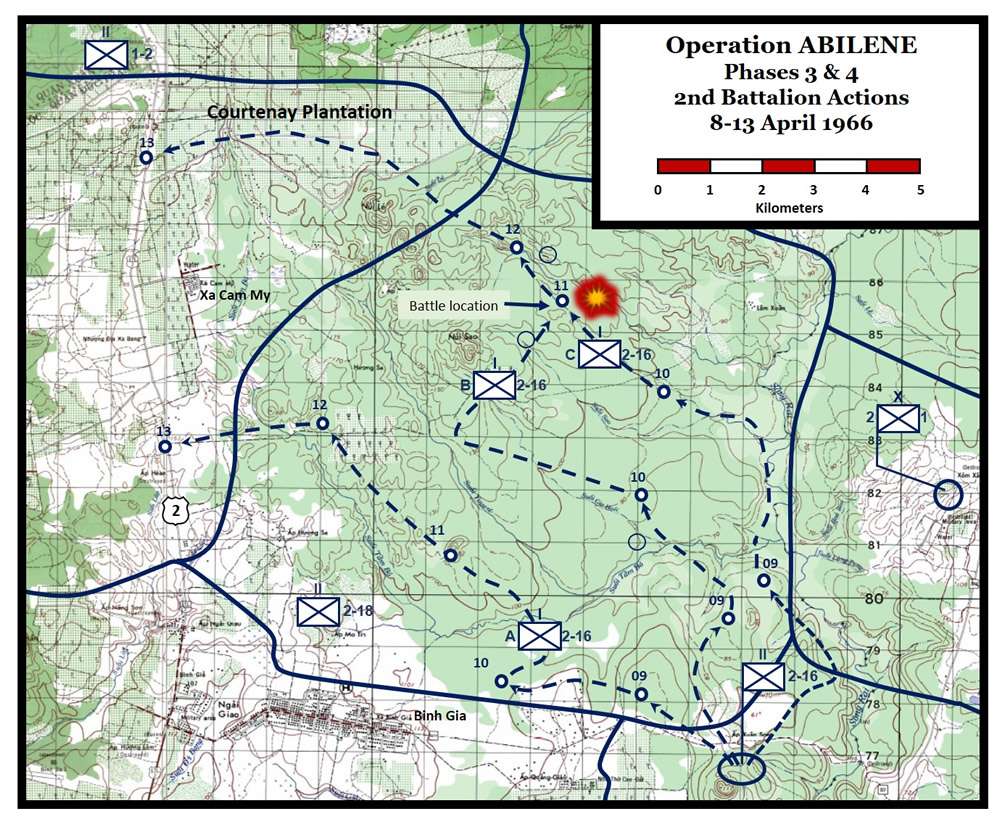