In mid-September 1966, the newly-arrived 196th Infantry Brigade initiated Operation ATTLEBORO to conduct sweeps around its Tay Ninh base camp as a training effort. On 2 November, the brigade conducted a complicated S&D sweep to the northwest of Dau Tieng and bumped into the 101st PAVN Regiment, which was apparently en route to attack the Soui Da Special Forces camp. The situation went sour when the commander of the 9th PLAF Division ordered all his units to attack the 196th Brigade. On 4 November, the 101st Regiment ambushed the 1st Battalion, 27th Infantry, pinned it down, and inflicted serious casualties. Meanwhile, the 196th piecemealed units into the fight, and the effort went from bad to worse. The acting commander of the II Field Force, Maj. Gen. Frederick C. Weyand, contacted General Dupuy to have the 1st Infantry Division take over the operation that afternoon. As the 196th attempted to disengage from the enemy, Dupuy moved the Big Red One into positions to take on the 9th Division.

On 5 November, Dupuy ordered the 3rd Brigade to move to the Suoi Da Special Forces camp and the 2nd Brigade to the Dau Tieng base camp. The 2nd Brigade ordered the 2-16 IN, commanded by LTC William Hathaway, to move there first to secure the staging area at Dau Tieng. The 2nd Battalion arrived at Dau Tieng about 1845 and formed a defensive perimeter to protect the entry of the rest of the brigade. The next battalion into Dau Tieng was the 2-18 IN, Vanguards. The brigade’s remaining battalion, 1-18 IN, had been attached to the 3rd Brigade, so the following morning, LTC George M. Wallace’s 1st Battalion, 16th Infantry, was attached to the 2nd Brigade and sent to Dau Tieng. For the entire ATTLEBORO period then, both Ranger battalions operated under the control of the 2nd Brigade.

At 1350 on 6 November, Wallace’s battalion was designated as the brigade ready reaction force (RRF) and remained at Dau Tieng. The other two battalions (2-16 and 2-18) were ordered to insert into LZs west of Dau Tieng that afternoon. About 1605, 2-16 IN picked up by UH-1 Hueys and winged its way to LZ JOE to begin S&D sweeps toward Objective TANGO. Intensive artillery and air preparation fires blasted the areas around the LZ, but as the choppers approached, VC troops, apparently lying in wait, opened up with all they had. But the enemy fire failed to stop the Rangers who leaped from the helicopters and assaulted. Once the entire battalion was on the ground, Hathaway had his troops conduct searches around the immediate perimeter. The effort recovered twelve bodies with weapons, but the numerous blood trails indicated that VC casualties from the artillery fire were much greater than that. Impending nightfall prevented a more thorough search and only enough time for the battalion to develop an effective NDP.

The following morning, Wallace’s 1st Battalion also landed at LZ JOE and passed through the 2-16 en route for OBJ TANGO to the northeast. Wallace’s movement confirmed that many other VC were killed by the artillery preparation. The combined search efforts of both battalions revealed a total of sixty-five enemy KIA. By 1305, Wallace was on TANGO with no further contact. Both battalions conducted S&D sweeps throughout the day and each located a base camp and supplies, all of which were destroyed.

The following day (8 November), Wallace and Hathaway were both alerted for another air assault mission set for 1200 on 9 November. This time, the 1st Battalion went into LZ HOTEL first. As before, a concentrated artillery preparation preceded the insertion, but this time, the battalion went in with no resistance—at least initially. Only after the choppers began to lift off did the VC respond, and then with only sporadic small arms fire. Once again, immediate patrols discovered a base camp that indicated recent occupation, and at one location, ten bicycles abandoned by their owners.

About 1500, the 2nd Battalion inserted into HOTEL, followed by the 2nd Brigade tactical CP (TAC CP). The 1st Battalion assumed defense of the north side of the perimeter, the 2nd Battalion the south, and both settled in to conduct a series of recon and ambush patrols that afternoon and evening. The brigade NDP was probed several times that night, resulting in several sharp bursts of fire around the perimeter. The light of the following morning revealed five enemy bodies. As on the previous two days, the sweeps conducted on 10 November uncovered tunnels, ammunition, and other supplies but resulted in no significant contact with enemy forces. It seemed as if the enemy had just melted into the surrounding terrain. Additional efforts over the next two days still failed to lure the 101st Regiment into battle, so the 2nd Brigade extracted both battalions back to Dau Tieng on 12 November for refitting and preparation for future operations. 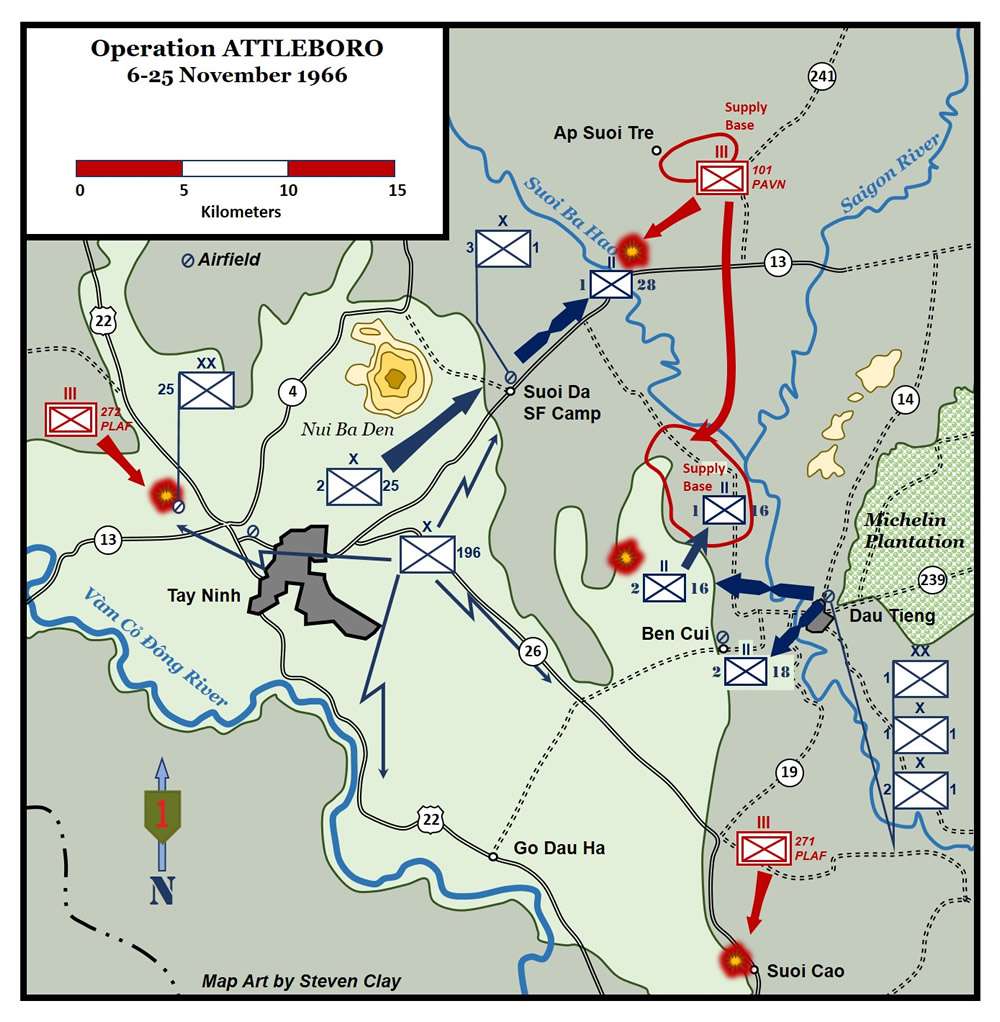