As US troop strength in South Vietnam continued to grow in late 1966, General Westmoreland looked forward to an opportunity to conduct a multi-division operation in the III CTZ to seek out and destroy enemy strength in areas where had he hitherto lacked the combat power to effectively attack. The II Field Force commander, Lt. Gen. Seamans, wanted the initial strike to take place in the “Iron Triangle.”   The Iron Triangle had long been a base for VC logistics operations and was characterized as a “dagger pointed at Saigon.” It was also suspected of harboring the headquarters of Military Region IV, a COSVN command and control cell that directed enemy military and political efforts against the Saigon capital region. Thus far, the Iron Triangle had only been lightly tested, most notably during Operation MASTIFF almost a year before.

The intent of Operation CEDAR FALLS was to attack into the Iron Triangle and the Thanh Dien Forestry Reserve in order to “destroy enemy forces, infrastructure, installations and the Military Region IV headquarters.” Additionally, the area’s civilian population were to be evacuated and resettled elsewhere. The entire Iron Triangle was to become a barren wasteland to preclude its support of, and continued use by, the VC. If successful, it was believed that the operation would also trap and destroy the partially rebuilt Phu Loi Battalion, the 272nd PLAF Regiment (which turned out to actually still be in Cambodia), and the 165A PLAF Regiment. The latter unit was also called the “Capital Liberation Regiment” and had the primary responsibility for operations in the Saigon area. The operation was ambitious. Seamans intended to use a massive “hammer and anvil” technique. The anvil was to be formed by the 2nd Brigade, 25th Infantry Division, and the 196th Infantry Brigade positioned on the south side of the Saigon River from Phu Hoa Dong in the southeast to the Boi Loi Woods in the northwest. Blocking positions on the southeast end of the north side of the river were to be emplaced by the 35th ARVN Ranger Battalion; the 1st Battalion, 503rd Infantry; and the 1st Squadron, 4th Cavalry. The hammer would be formed by the 2nd and 3rd Brigades of the 1st Infantry Division in the north and northwest and the 173rd Airborne Brigade to the east.

By 8 January, the anvil units were positioned waiting for the hammer to fall. On the morning of 9 January, the 1-16 IN boarded choppers at Lai Khe and air assaulted into a LZ on the edge of the Thanh Dien Forestry Reserve, just west of the Thi Tinh River. As the 3rd Brigade’s left most unit, the 1-16 had the 173rd Airborne Brigade on its left and the 1st Battalion, 2nd Infantry, on its right. The battalion’s mission was to conduct a S&D sweep south to the Saigon River in coordination with the other “hammer” battalions. The first day was largely uneventful though the battalion killed two VC that night in its NDP. The following day was once again unremarkable. On the 11th and for the next several days, the battalion provided security for “Rome plow” bulldozer teams that cleared hundreds of acres of jungle to destroy existing base camps and caches and prevent future use by the VC. Ultimately, the battalion remained in the field until 16 January and accounted for only five VC KIA and three captured, but its troops captured or destroyed some seventy-five tons of rice and several small base camps.

While the 1st Battalion was participating in the opening stages of CEDAR FALLS, the 2nd Battalion was back in Thu Duc on its second stint in Operation FAIRFAX. The 2nd Rangers pulled out of Thu Duc about mid-January. On 17 January, the day following the 1st Battalion’s return to Lai Khe, the 2-16 conducted an air assault into the Iron Triangle near the notorious village of Ben Suc. Like the 1st Battalion’s efforts the previous week, those of the 2nd Battalion were just as void of significant accomplishment during the remainder of the operation. The overall results of CEDAR FALLS, however, met Seaman’s objectives for the operation. Some 700 VC were killed, and an equal number surrendered or were captured. The support infrastructure of Military Region IV was destroyed and the capture of several of that headquarters’ camps generated a windfall of valuable intelligence about VC operations in South Vietnam. Additionally, the destruction of Ben Suc village, the evacuation of civilians from the Iron Triangle, and the work of the Rome plows, which leveled eleven square kilometers of jungle, made the vaunted Iron Triangle almost useless to the enemy for any near-term future operations against Saigon. 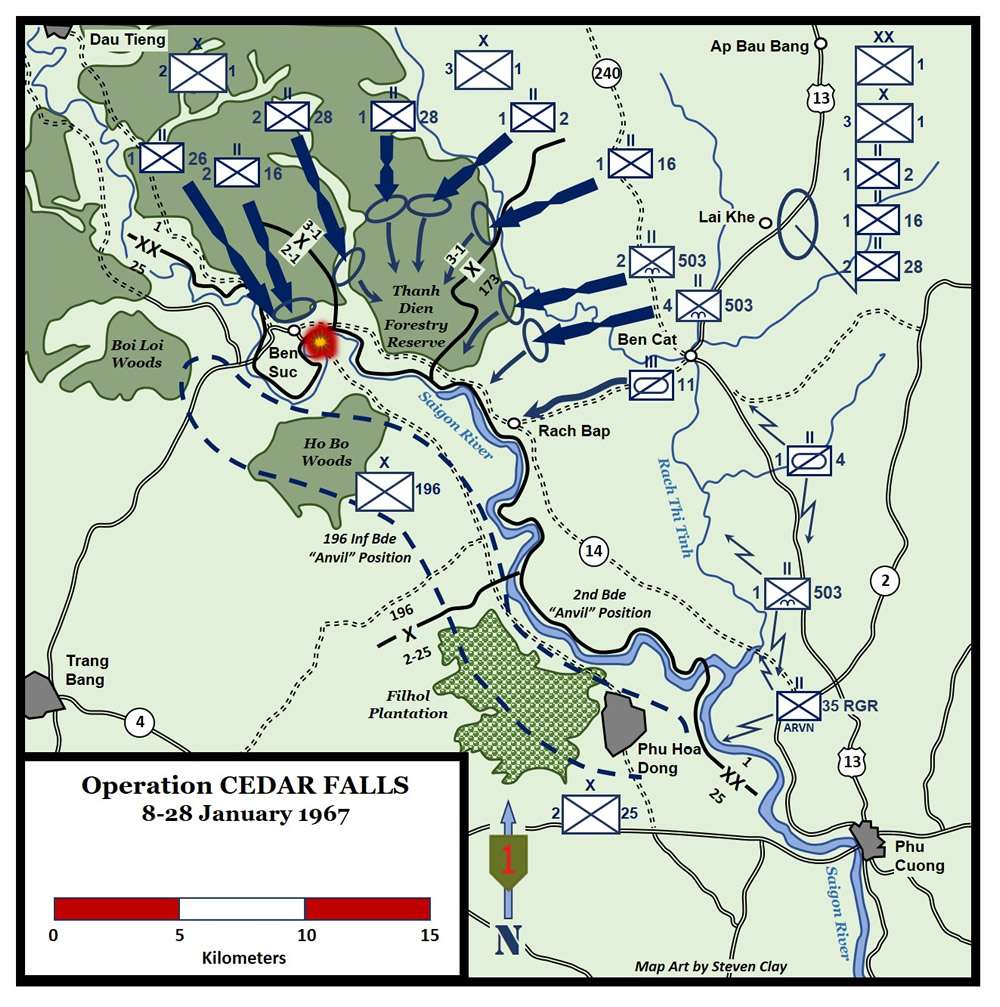