On 21 February 1966, Lt. Gen. Jonathan O. Seaman initiated Operation MASTIFF to find and destroy the 9th PLAF Division and stop VC supplies moving eastward from War Zone C into War Zone D. The 1st Division mission for MASTIFF was to conduct offensive operations with the 2nd and 3rd Brigades in the vicinity northwest of Ben Suc village, a notorious VC support base. The division’s AO was along the south side of the Saigon River, and the intent was to find and destroy any enemy units in the area and disrupt enemy infiltration operations into War Zone D. The 2nd Brigade was assigned the western sector of the division AO, and the 3rd Brigade was given the eastern sector. Both brigades had missions to conduct S&D operations using a blocking battalion and two sweep battalions. Of the two, Col. Albert E. Milloy’s 2nd Brigade had the more difficult mission. The brigade was to air assault into two LZs, ANN and BETTY, located along the line of departure (LD), phase line TERRIER. The 1-18 Infantry had the mission to land in BETTY and to move to set up the western blocking position (STEEL). The other two battalions, 2-16 and 2-18, were to sweep through AO COCKER, then turn 90 degrees to sweep through AO BULLDOG to the Saigon River (phase line POODLE). Brodbeck’s 3rd Brigade was to perform an almost mirror image operation but without the difficult 90 degree turn. The 1st Squadron, 4th Cavalry (nicknamed attached to the brigade for MASTIFF, was to set up blocking position PAUL in the east. The 1-16 and 2-2 Infantry would insert into two LZs along phase line SHEPHERD, then sweep through AO COLLIE to the river. When all battalions were in their initial positions, the 1st Division would form a box around the area known as the Boi Loi Woods, with the river forming a closed lid to prevent any enemy infiltration through that direction. As the battalions closed in, the enemy would be concentrated with no means to escape and thus, forced to fight.

The 2nd Battalion airlifted into LZ ANN at 0900 on 21 February and began movement to the east. To the south, the 2-18 paralleled Hathaway’s 2nd Rangers in AO COCKER, while the 1st Battalion, 18th Infantry, moved to and occupied blocking position STEEL at the Route 238 bridge across the Rach Suot River. All day, resistance was light and only three VC were killed as the two battalions swept to phase line GREYHOUND. The following day was similar to the first, except that the battalion found and destroyed a VC hospital complex. On 23 February, the battalion reached the Saigon River and was detailed by the 2nd Brigade to assist in the evacuation of tons of rice located in the sweeps during the two previous days. On 25 February, the battalion was airlifted back to Camp Bearcat. The MASTIFF operations of the 1st Battalion were not unlike that of the 2nd, but with more contact with enemy forces. About 0900 on 21 February, Lober’s Rangers, hit the ground in LZ HAL. These units secured HAL for the second lift, consisting of C Company. Just prior to the arrival of C Company, six 82-mm mortar rounds landed among the troops of A Company. No casualties were incurred, but it became evident to the Rangers that “Charlie” was indeed out there. Lober pushed his troops northeast into the jungle and within minutes B Company was engaged by sporadic fire. After killing one VC and wounding another (both of whom turned out to be female), the battalion pushed on to occupy a NDP for that night. During the afternoon and evening, the position was probed several times resulting in another dead VC.

The following morning, 1-16 began its S&D sweep northeast. Moving through dense, tangled brush, the Rangers made slow progress against light resistance. Several rice and ammunition caches were discovered but only infrequent contacts were made with the shadowy foe. At 1340, VC soldiers command-detonated a claymore-style mine against C Company, killing four men and wounding four others. Two hours later, A Company discovered a regimental headquarters and mess hall, along with various supplies and equipment and 9,000 rounds of small arms ammunition. Company C later discovered extensive trench and tunnel systems and Company B discovered a battalion base camp nearby. As the Rangers pushed north, they contended with numerous boobytraps. In their efforts to get away, the VC had extensively boobytrapped facilities, supplies, and trails. The danger posed by these devices generally slowed operations, as men took time to defuse, disarm, or otherwise dispose of the hazards. The following day was spent uneventfully in a nearby blocking position as the 2nd Brigade’s 2-18 Infantry came up on the left in AO BULLDOG in an effort to drive the enemy into the Rangers’ guns. Unfortunately, the Vanguards had not been made aware of the plan so nothing was accomplished by the effort. On 24 February, Lober split up the battalion to begin the destruction of the facilities that had been discovered on the 21st. He sent A Company to demolish the regimental headquarters and B Company to raze the battalion base camp. As A Company approached its objective, it bumped into a dug-in VC force, estimated at twenty men. One platoon laid down a base of fire, while the rest maneuvered to flank the VC position. In the skirmish, The VC troops, well-camouflaged and hidden in the trees, killed two A Company troops and wounded three others. Discovering blood trails leading to the camp, the commander ordered his men forward. As they reached the camp, small arms fire erupted from an enemy force estimated at platoon strength. Instantly, A Company went into action but quickly lost three more men, one mortally wounded. In moments, the company assaulted through the compound and secured the area, but the VC had melted away. Though no bodies were located, based on blood trails and body parts, the commander estimated that the VC had lost eight KIA and eleven WIA. Over the next three days, 1-16 IN made no further contact was made with enemy troops, though it did make several additional discoveries of small arms ammunition and supply caches. On 27 February, the battalion was airlifted back to Lai Khe. Overall, MASTIFF was a reasonably successful operation. There had been hopes of cornering and destroying a VC regiment, but the results fell well short of that. The division accounted for only thirty VC KIA, but destroyed extensive enemy facilities and large amounts of supplies. The 1st Battalion alone accounted for a quarter of the enemy KIAs. 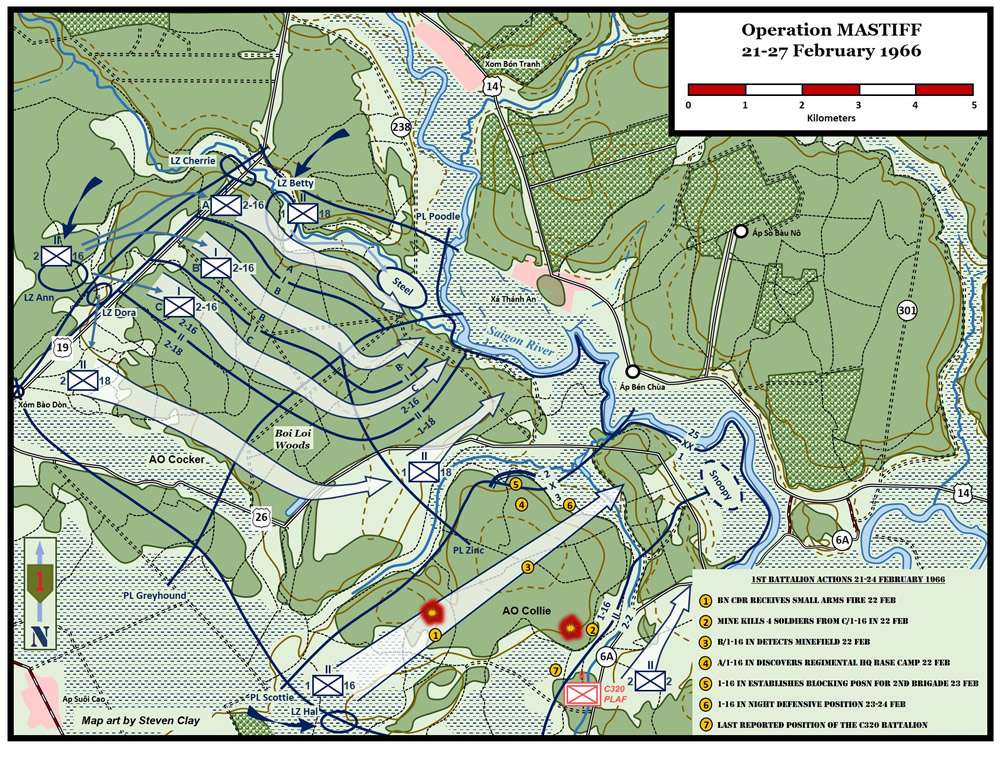