In early August 1969, the 1st Infantry Division determined that its old nemesis, the 9th PLAF Division, was preparing for a new offensive in Binh Duong province. By this time, the 9th Division had been reorganized and redesignated as a PAVN (NVA) division. After the massive casualties it suffered during the vicious battles in 1966 and 1967, and especially due to the division’s disastrous efforts in the 1968 Tet Offensive, most of the original VC troops were gone and their replacements were all from the north. The intelligence indicators were that the enemy division might strike areas along Highway 13 between An Loc and Quan Loi from bases across the border in Cambodia. That area was now the AO of the 3rd Brigade, 1st Cavalry Division, since that division had assumed responsibility for Binh Long province.

As that shift in TAORs occurred, the 11th Armored Cavalry Regiment had been placed under the operational control of the 1st Cavalry Division. To counter the 9th Division’s plans around An Loc, Maj. Gen. Elvy B. Roberts, CG of the 1st Cavalry Division, initiated Operation KENTUCKY COUGAR with the 11th ACR as reinforcement. In late July, the 1st Infantry Division placed the 1st Battalion under the operational control of the 11th Armored Cavalry Regiment to provide that unit with more infantry capability. As directed, the Iron Rangers moved north on Highway 13 from Lai Khe to help the cavalry block the eastward movement of the 272nd and 273rd Regiments.

Over the next thirty days, the Iron Rangers fought two major actions and numerous minor engagements. The first major action was a battle five kilometers northwest of An Loc on 12 August. For the five days prior to that mission, the 1st Battalion (for this mission consisting of the Headquarters Company, and A and C Companies only) was primarily utilized to secure a series of FSBs in areas between Quon Loi and An Loc. On the evening of 11 August, the Iron Rangers, less A Company, assembled at FSB ALLONS II about eight kilometers north of An Loc, as the RRF for the 11th ACR. Given the diminished size of the Iron Rangers for this operation, that afternoon the 3rd Brigade, 1st Cavalry Division, attached D Company, 5th Battalion, 7th Cavalry, to provide the 1st Battalion with additional firepower and dismount capabilities. Even with the additional rifle company, the battalion commander, LTC Kenneth G. Cassels, still only commanded just over 300 men for the impending operations.

On the morning of 12 August, Cassels was directed to converge his units in the vicinity of FSB EAGLE II to counterattack an enemy force that had attacked the fire base a couple of hours earlier. Moving in the darkness, the battalion’s elements linked up at EAGLE II about dawn without encountering the expected enemy resistance. Cassels then decided to move along the enemy’s suspected withdrawal route to the southwest. The Iron Rangers moved out with A Company in the lead, C Company following, and the troops of the 7th Cavalry riding on the tops of the C Company tracks.

Encountering a suspicious ford at a small stream, A Company took a great deal of time to reconnoiter the area before crossing. Cassels, impatient with the delay, moved forward to push the company across the ford. Cassels’ track joined the column about five vehicles back from the front. After traveling about four kilometers, the lead elements were hit by RPG and automatic weapons fire about 0705. The first track in the column, the platoon leader’s, was struck by an RPG round, and just seconds later, struck again by a 57-mm recoilless round that killed the driver and set the vehicle on fire. The platoon leader was blown clear of the vehicle, but only slightly dazed. Within minutes, the Iron Rangers were engaged against a 600-man battalion of the 272nd Regiment.

Though outnumbered two to one, Cassels turned the battalion to attack in a southeasterly direction, with C Company on the right, A on the left, and his command track between the two. The .50-caliber machine-guns laid down a massive base of fire, as the D Company “grunts” scrambled off the tops of the tracks and deployed forward and between the tracks. The infantrymen from A and C Companies also deployed and added their fire to that of the tracks, but the enemy fire steadily increased and the advance of the battalion was stopped. Cassels called for air support and artillery. After about forty minutes of intense fighting, Cassels’ track, as well as that of the C Company commander, had been disabled by enemy fire and the two commanders had to scramble to other vehicles to continue the fight. Soon, the enemy force attempted to flank the battalion, but the Iron Rangers countered the move and then began driving the enemy eastward in an attempt to push them into a clearing where the choppers of the 1st Cavalry Division’s 2nd Battalion, 20th Field Artillery (Aerial Rocket) could attack the NVA troops. By noon, three more APCs had been knocked out of action as the enemy continued the fight. Fighting continued until 1600, when the 3rd Brigade directed Cassels to break contact. The subsequent sweeps located twenty-nine bodies of the 272nd Regiment and numerous weapons and ammunition. The fighting cost the Iron Rangers two KIA, twenty-seven wounded, and five APCs destroyed. 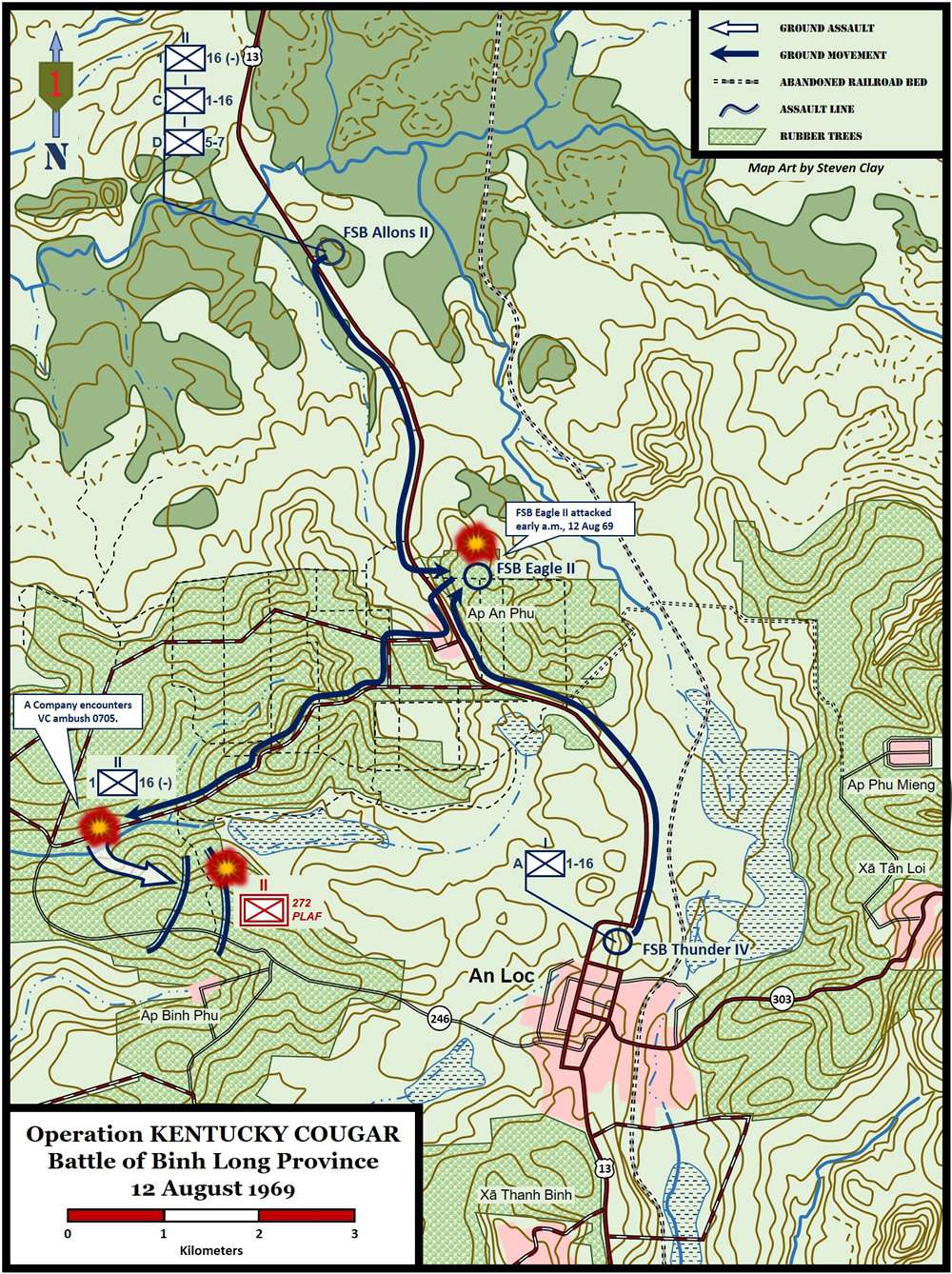 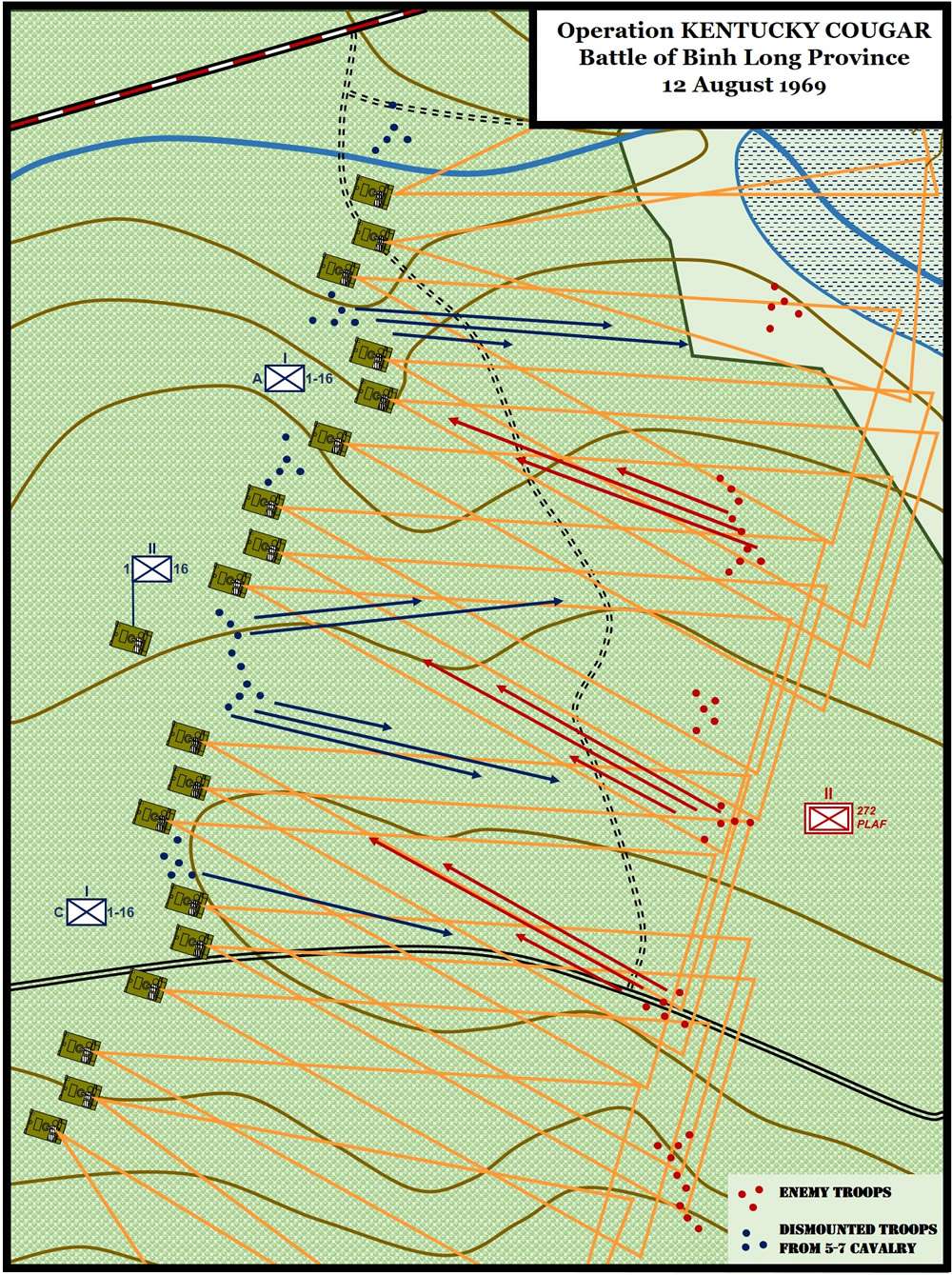