After Vietnam, the 1st Infantry Division, less the 3rd Brigade, was reorganized in April 1970, once again at Fort Riley, this time as a mechanized infantry division. There, the 2nd Battalion was reorganized as a mechanized infantry battalion. The 1st Battalion’s colors and records were initially shipped to Sheridan Kaserne, Augsburg, Germany, where it was also concurrently reorganized as a mechanized infantry battalion as part of the 3rd Brigade, 1st Infantry Division, later designated as the 1st Infantry Division (Forward). In 1972, the battalion moved again, this time to Panzer Kaserne in Böblingen. In Germany, the 1st Battalion conducted training events and local training areas and frequent rail operations to training areas at Grafenwöhr and Hohenfels. Its soldiers also made frequent trips out to the battalion’s General Defense Plan (GDP) positions to recon and evaluate how it would defend the ground. The battalion also participated in the various REFORGER exercises and occasionally trained at locations such as the urban combat site in Berlin.

In 1983, the US Army underwent a major reorganization that encompassed a new division TOE (i.e., “Division 86” or the “J-Series” TOE) and the US Army Regimental System (USARS). Under USARS, the 16th Infantry was expanded by two additional active battalions: the 4th Battalion (nicknamed the Blue Devils), which was activated at Cooke Barracks in Göppingen, Germany, as part of the 1st ID (F); and the 5th Battalion (nicknamed the Devil Rangers), which was assigned to the 1st Brigade at Fort Riley. These new battalions were activated to support the USARS and a new manning system called COHORT (Cohesion, Operational Readiness Training). Under the COHORT concept entire companies would go through basic and advanced individual training together, transfer to their new battalion, and spend the rest of the “life cycle” of the company training together until replaced by another COHORT company at the end of 3 years. Additionally, the program’s intent was that a Soldier would spend his entire career, except for non-divisional assignments such as recruiting, R.O.T.C., or Reserve Component advisory duty, in the same regiment. In the case of the 16th Infantry, soldiers would transfer to Germany as part of the 1ID (F) and back again to Fort Riley to the 1st Infantry Division. After providing support to Operation DESERT SHIELD and DESERT STORM in 19910-1991, both battalions of the regiment in Germany were inactivated as part of the Post-Cold War drawdown there. 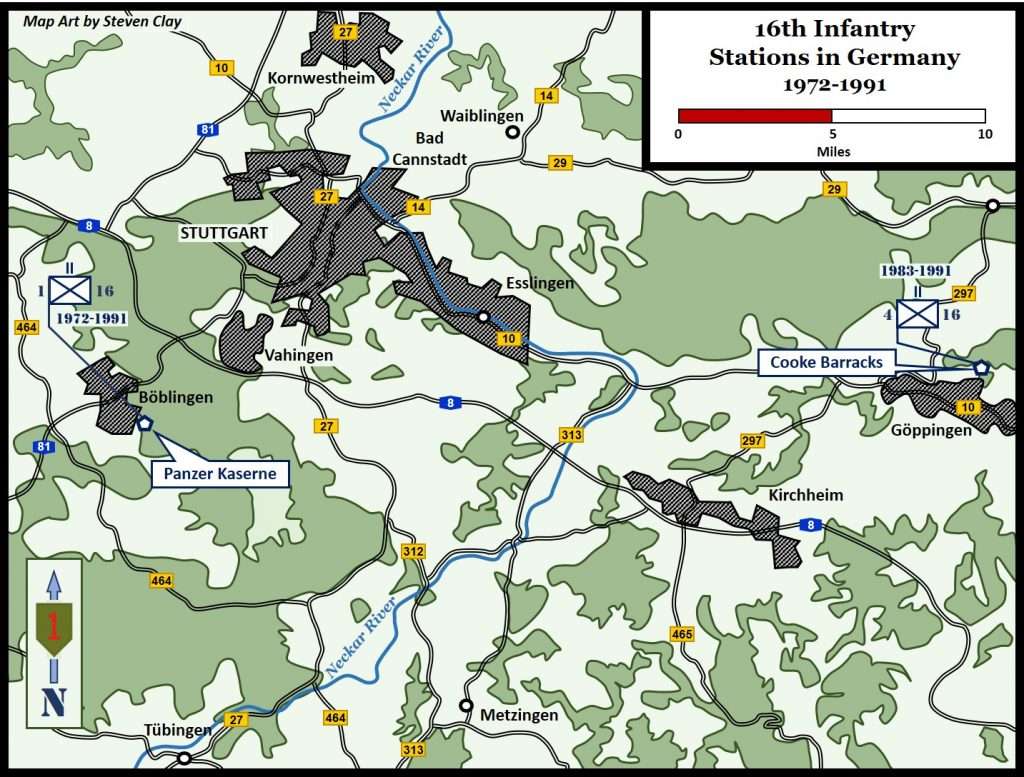