During the 1967 battles in War Zones C and D, the Big Red One had severely handled its arch-rival, the 9th PLAF Division, on several occasions. One result of these efforts was that by January 1968 the transition from large-scale combat operations to local RIF and S&D sweeps, conducted by platoons and companies, was well underway. When units were not conducting these small-scale combat missions, they were typically involved in pacification efforts.

The 1st Battalion and A Company had deployed, ostensibly on a temporary basis, from Lai Khe to Fire Support Base (FSB) Thunder IV near Ap Bau Long along Highway 13 north of Lai Khe. The other companies were located at FSBs I, II, and III. Toward the end of the month, the 2nd Battalion was also dispersed to several fire FSBs in the vicinity of Di An and Phu Loi. The Rangers did not know it, but their movements to those locations was in response to directives by MACV to pull US units closer to Saigon.

Information regarding a massive enemy build-up began to surface in December and movements of VC and NVA units toward Saigon in January confirmed a hunch that the enemy was about to launch a major offensive, possibly against the capital itself. Westmoreland directed LTG Weyand, the II Field Force commander, to strengthen US forces around Saigon. By the time the Tet Offensive got underway, over half of the US maneuver battalions in the III CTZ were already in various positions to block or defeat an enemy attack.

The area north of the capital remained relatively quiet until 1 February, when A Company, 2nd Battalion, guarding a bridge near An My was attacked by elements of the 273rd PLAF Regiment while operating with the 1-4 Cavalry. This event began a series of other, albeit less spectacular, engagements in the areas of operations for the two Ranger battalions during the Tet Offensive of 1968. These events, among a few lesser actions, were (see numbered explosions above for locations):

Throughout February, the 2nd Battalion, less C Company, continued to operate in the An My-Di An area. Company C, meanwhile, was detailed to guard the critical Route 15 bridge only four kilometers from downtown Saigon. For the month of March, the battalion carried out mop-up operations and ambush patrols in the Phu Loi area.

Initially, the 1st Battalion remained north of Lai Khe and experienced less of the major fighting associated with the enemy offensive. On 19 February, however, the battalion moved to Di An where it was attached to the 2nd Brigade to assist in protecting the capital. Three days later, elements of the battalion engaged portions of the 165th PAVN Regiment a few kilometers near Lái Thiêu northwest of Tan Son Nhut Air Base. Contact with the enemy also increased while on security sweeps and resulted in thirty-four enemy KIA for the month. The 1st Battalion returned to Lai Khe on 16 March.

For all intents and purposes, the great enemy offensive was over by the end of the month. The Tet Offensive of 1968 was the largest Viet Cong operation up to that date and for the rest of the war, at least while US troops were involved. Initially, some 84,000 VC and NVA troops attacked thirty-six of the forty-four provincial capitals and hit almost every airfield in South Vietnam. Most importantly, the VC mounted a major attack against Saigon, including the US Embassy, the Presidential Palace, the ARVN Joint General Staff headquarters, and Ton San Nhut Air Base. While Tet would become a significant political victory for the Viet Cong, it was also a military disaster. Between 31 January and the end of February, the enemy had suffered between 32,000 and 45,000 casualties. By August the total number climbed to over 100,000. In the 500-man battalion of the 9th Division’s 273rd Regiment which fought at An My for example, only forty-five men remained that were not dead or wounded. On conclusion of the 1968 Tet Offensive, the Viet Cong as a military force was devastated and would never again be able to go toe-to-toe with American forces in the field. 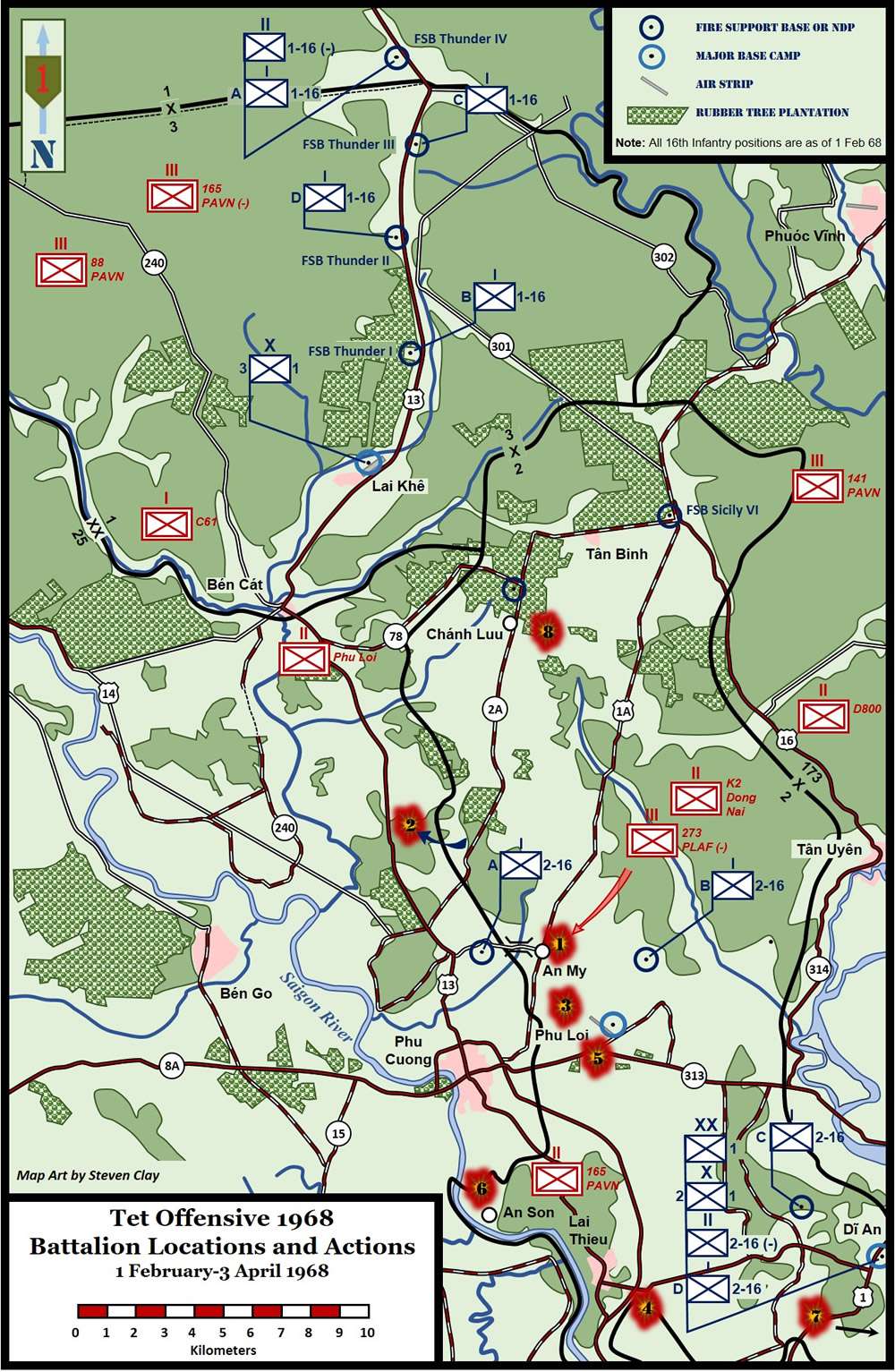